In North Korea, the real truth about anything – or anyone – is elusive.

The North Korean army officer who led me into the room was tall, with pale skin and pouty lips as red as the star on her fuzzy, square hat. Her name was Miss Rhee. She told me to sit.

Miss Rhee’s slender fingers flicked a switch, and the room went dark. We were in Pyongyang, the capital, inside a museum dedicated to the Korean War that left the peninsula divided into a communist north and a capitalist south in 1953. Outside, a weak gray light filtered over the frigid, February streets. Unlike the hotels we’d been in, the museum was warm.

Lights from a large diorama faded in to reveal a giant model of a battlefield scene. Figures depicting soldiers from the north were butchering anti-communists from the west and south, with no expense spared on gore.  Bayonets slipped through ribs. Mortars blew off legs. In one scene, a crow was actually eating the heart of a dead American soldier.

Miss Rhee smiled. It was a real smile. She was 27, bright and hungry for knowledge. Earlier, during a break at the museum’s cafe, she'd sat next to me close enough that I noticed how she smelled of honey and lilacs, and not of the coal-fired tang that glazed everything in the city.

We talked about books, which are hard to come by in North Korea. I showed her one I'd just purchased in the gift shop, a little green paperback called Songun Politics of Korea by the late dictator Kim Jong Il, that spells out why military affairs should trump all aspects of society. “It’s sooo good,” Miss Rhee gushed, grabbing my copy and clutching it to her breast.

“When can I eat your noodles?” I whispered.

She giggled into her hand but gave no answer. That’s Korean code for “When are you going to get married?” Apparently, 27 is old to be unmarried in Pyongyang.

Back inside the diorama room, the lights came on and my eyes adjusted to the brightness. Miss Rhee glided off to the next exhibit, her black heels clicking on the immaculate marble floors. She slid past paintings where all of the faces of regime founder Kim Il Sung had been redone to make him look like his grandson, Kim Jong Un, the current dictator. A wave of melancholy washed over me.

Did Miss Rhee not get how absurd all of this was? How could she not sense all the misinformation she’d been been fed, that North Korea had started that war, that communism had failed her, that her rulers were corrupt, murderous thugs? Wasn’t a heart-hungry crow just a touch over the top?

Of course not. Miss Rhee was a soldier and therefore a believer. In the Democratic People’s Republic of Korea, conscripts in the world’s fourth-largest standing army don’t just prepare for nuclear war. They build roads. They dry the grains and dam the rivers. Someone in some Important Bureau of Something had assigned Miss Rhee – this beautiful, chatty, elegant face of corrupt socialism – the demeaning task of taking visitors like me through the halls of the Fatherland Liberation War Museum. This was her duty. She did it without question.

Eventually, I bowed my head and said goodbye. Miss Rhee was but a blip in the narrative of my seven very long nights in North Korea, yet I couldn't stop thinking about her. I could not grasp how such a dark, brutal, and tragic place could breed someone so lovely. The answer, like everything in North Korea, would never really set.

My traveling pal, Dan Patitucci, waited outside the museum near the remains of some downed, 60-year-old US Army helicopters. It’d all been too much. The stress of not knowing who knows what about anything in North Korea creates a low-grade anxiety that’s always there, aching like a bruise you can’t stop pressing. It makes you suspicious of everything.

I told Dan how, under different circumstances, I thought Miss Rhee and I might be friends. The color drained from his face.

“Dude,” he said. “She’d stick a knife in your throat the first chance she got.”

Editor’s note: We’re all about adventurous, independent, off-the-beaten track travel – except in North Korea. It’s not that kind of place. If you can’t abide by their rules, don’t go. 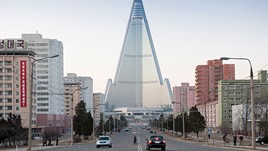