Cry of the Wild: Orangutan Encounters in Borneo

Searching along the Kinabatangan River, Julie Fison wonders if time is running out for these endangered primates.

The scale of the deforestation is painfully obvious from the air. Huge swathes of Borneo’s jungle have been replaced by palm oil plantations. As I come in to land in Sandakan, on my first visit in 25 years, I should be excited. Instead, my heart is sinking. I’ve brought my family to the Malaysian province of Sabah, hoping to see orangutans in the wild, but I’m starting to wonder if I’ve left it too late.

Conservationists estimate orangutan numbers have halved since 1999, with fewer than 100,000 Bornean orangutans left in the wild. Habitat destruction, hunting, and the illegal pet trade have all taken a massive toll.

The Sepilok Rehabilitation Centre, just outside Sandakan, is one of the many organizations working to make a difference. Sepilok has been taking care of orphaned orangutans since 1964, teaching youngsters vital forest skills before releasing them into the neighboring reserve. The animals are free to roam, but twice a day, staff drop off tasty morsels to supplement their diet.

It’s almost time for the morning food drop when we arrive at Sepilok, the first stop on our three-day safari. A large viewing deck fills with visitors, cameras poised, anxiously waiting for the great apes to arrive at the outdoor feeding platform.

Arrangements were much looser last time I was here. The few visitors who found their way to Sepilok pretty much mingled with the apes. One cheeky youngster got bored of the fruit and stole a girl’s scarf, then unzipped another visitor’s money belt and grabbed a handful of cash. As I made my way out of the sanctuary, he reappeared and latched onto my arm. I had to hand over a cheap bracelet before he released me.

The encounter stayed with me for years, eventually finding its way into one of my children’s books, The Call of the Wild, about a young nature lover raising money for an orangutan charity at her school.

As the minutes tick by on the feeding platform, only a pig-tailed macaque appears to raid the bananas. I’m not worried about orangutans getting too close – I’m concerned they’re not going to appear at all. Sometimes, when the rainforest trees are fruiting, they don’t bother with the handouts.

We’re in luck today, though. A young orangutan finally strolls down the boardwalk like he’s been waiting for the crowd to build before making an entrance. More orangutans materialize, and soon the feeding platform turns into a busy buffet. A chilled-out orangutan is spread-eagled across the mesh roof of the viewing deck. He’s here to see the visitors.

The laid-back charm of the established Sepilok residents and the antics of the newcomers frolicking in the nearby nursery are enough to touch anyone, but they disguise the tragic reason the orangutans are here. Most have been rescued from poachers’ cages or found wandering alone and starving, their mothers assumed dead. These are the lucky ones.

That afternoon, we’re deep in orangutan territory, two and half hours away from Sandakan by boat, scouring the banks of the Kinabatangan River for movement. The Kinabatangan is Sabah’s longest river – a vital habitat for birds, primates, and even pygmy elephants. A narrow stretch of forest along this “corridor of life” is a protected sanctuary, making it one of the best places to find orangutans in the wild.

As we putter up the wide, brown river, we find a troop of aptly named proboscis monkeys basking in the late afternoon sun. We spot noisy macaques fighting over fruit. Hornbills and vibrant kingfishers flash across the sky. But my eyes are desperately searching for red hair in the trees…without success.

Over the next two days, we explore the serene waterways at daybreak and sunset, poking into inlets, drifting through oxbow lakes, past towering trees and dense jungle. We find elephant footprints on the muddy riverbank, but we’ve missed the herd. They’ve swum to the palm plantation on the other side. We can’t follow them there.

The orangutans are also elusive. We finally spot a lone animal at the very top of the canopy, so high we need binoculars to see it. Even here, orangutan sightings are few and far between.

It's our last morning at the Sukau Rainforest Lodge, and I’m up at dawn hoping for one last glimpse of an orangutan. My bleary eyes have barely adjusted to the light when I hear creaking in the canopy. A dark shape is moving between the branches – a smaller one is just behind. In the tree right outside our villa, a mother orangutan and her baby are foraging for young leaves.

My family joins me on the boardwalk, and we follow the pair as they move through the treetops, the mother teaching the baby essential survival skills. It’s a precious encounter that makes the entire trip worthwhile. But wondering how these two will navigate the many threats ahead fills me with fear. And pondering how many orangutans will remain, and how much of the beautiful wilderness will still be intact, if I returned to Borneo in another 25 years almost breaks my heart.

Julie is an Australian writer - author of 11 books for children and young adults, a play, travel stories, and an ever-growing bucket list of places that she absolutely has to visit.

On the Trail of the Namibian Black Rhino A melting pot of cultures, with stunning beaches, great dive spots, challenging hikes, stories of the feared headhunters of Borneo and food so delicious they’re (almost) prepared to go to war. 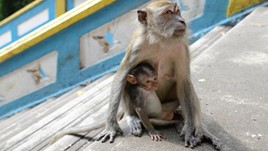 Are Monkeys Dangerous? Tips to Keep You Safe in Malaysia

While taveling through Malaysia you will probably encounter the local monkeys. Here's how to see them safely from afar.