How learning the art of storytelling in France helped me find solace from grief.

We’re in a small boat on the Thau lagoon, in the south of France. Thau is a nesting place for hundreds of birds, migrating between Europe and Africa. I’m there to perform a storytelling show for the Fête de la Nature (National Day to Celebrate Nature).

Suddenly, above us, there is an arrow of flamingos, pink against the blue. It takes me back to Zimbabwe, where I spent my early childhood, and the memory of my mother telling me stories while I watched sparks from the campfire chase each other up into the night sky.

Today would have been my mother's birthday. It’s now seven years since her death.

At her funeral, she was described as “the classic example of a free spirit”. In the 1970s, she had set off from New Zealand, taken a boat to South America, and met my father there before they moved to Africa. She always prepared seriously for travel. Her drawers were full of maps, and her notebooks full of languages.

I had grown up listening to her stories – family stories about our lives and our travels. My parents were in love with the natural world and helped me to see the world as a place of magic and mystery.

Now, the truth was that I was on the run. Being in France, far away from New Zealand, where our family had moved after leaving Africa, meant I could distance myself from the sadness of losing someone I loved. But at times, it seemed as if my homeland and everywhere else was meaningless without her being there.

Then, one night in Montpellier, I went to a theater to watch a French storyteller, Olivier de Robert. He told a folktale about a goat which does everything to gain its freedom from the farmer. One night, the goat manages to break out once and for all. She heads for the mountains, knowing that she is risking her life. But she goes anyway, for one glorious day of freedom. At night, a wolf tracks her down.

Olivier did nothing to soften the end and all its gory details: “The goat fought, but finally at dawn the wolf got his meal.”

The people in the audience sniffed and wiped away tears. I, too, was crying.

Olivier leaned towards us with a look which was half teasing, and half kindly.

“Why are you crying?” He lowered his voice. “Oh, you thought that the goat was going to win. Maybe that’s what stories are for. To keep that spark of hope glowing, so that maybe one day, all the goats will break out of their enclosure, and the wolves will run away?”

While I listened, my mother's face came to me, and I thought how she had lived seeking adventure. Her life didn't have a fairy-tale ending, although she fought bravely to the end against breast cancer. Listening to the story gave me a strange new solace from grief.

That night, I signed up for two years of storytelling training with the local storytelling association of Montpellier. Over the next two years, we learned to use our voices, rhythm, imagination, and gestures to make the stories our own. It was never easy. When you tell a story, there’s just you on stage. No props. No costumes. Nothing to hide behind.

Often, the same story can be found across vastly different cultures. It was another form of travel – through countries’ ancient cultures and imaginations.

For me, it wasn’t easy to tell stories in French. But our teacher told us, “You are there to pass the story on, that’s all. You must do the best you can for the story.”

Later, I learned that these simple folktales were thousands of years old, and often touched something on a subconscious level, that you couldn’t really put your finger on. Often, the same story can be found across vastly different cultures. It was another form of travel – through countries’ ancient cultures and imaginations.

There are hundreds of folktales about death, and immortality, and transformation. Telling these ancient stories made me feel connected to other people through the centuries who had also known grief.

Across the lagoon, our audience – a group of 40 children and adults – waits on the beach. The whole world seems to have fallen silent, apart from the whispering of the rushes. As we reach the shore, I try to step from the boat, but we’re too far from the beach and I step into water.

With shoes and jeans soaked, and because it fits in with the smell of the nearby sea, I tell an ancient story that night, from Irish, Icelandic, and Swedish culture. It’s about selkies – shapeshifters who live in the sea as seals, but come onto land and shed their skin to become women.

In the story, a fisherman finds a selkie and brings her onto the land to live with him as his wife. But she longs for the sea, and one day, she leaves him and their children and returns to the water. Ever after, though, there’s always a seal watching over the children while they play on the beach, and it’s said that some local children are born with webbed toes and dark eyes full of the mysteries of the sea.

I realize the story is about death, and people living with their heart torn between two places. It’s about living between two countries, about returning, and about memory and love. It’s my mum’s story, and my story, and the story of thousands of people across the ages.


Daniella grew up in Africa and New Zealand. She now lives in Montpellier, southern France, where she spends her time in as a storyteller, writer, teacher and scientist. 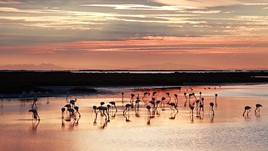