Crime in Colombia: Hotel Robberies and Assaults in Bogota

Here are a few cautionary stories about the dangers that lurk in Colombia, including hotel-room invasion robberies and assaults in Bogota.

A warning to the thousands of travellers heading to Colombia. The country's leaders have made enormous progress in ridding the nation of drug lords and violent gangs, but danger still lurks. The independent (English language) news organisation Colombia Reports reported in 2011 that violent criminal gangs in Bogota were targeting tourists in their hostels. Colombia Reports has given us permission to reproduce Jim Glade's report.

Take heed and take care when in Bogota.

Tourists to Bogota's La Candelaria district have been robbed by armed men inside their hostels on at least seven occasions in the past eight months admit several hostel owners. The violent nature of the robberies has escalated to the point that one American tourist was sexually assaulted with a gun.

The latest known and most gruesome incident took place last week when armed men seized a hostel and robbed eight guests of their valuables. One of the female guests to the hostel was sexually assaulted by the robbers.

The story of the victim was confirmed by her travel partner, who was robbed of everything but his passport.

When the police finally arrived 15 to 20 minutes later the gunmen were long gone. The police officers that did arrive were not too anxious to pursue the suspects or to investigate the crime scene to look for clues. Also there were no medical personnel to examine any of the guests of the hostel.

According to both these victims, police drove them to Bogota's international airport without filing an official report on the robbery and the alleged sexual assault.

One hotel owner, a member of the association of hostels in La Candelaria who wished to remain anonymous, told Colombia Reports there have been seven armed robberies of hostels in the past eight months. Reports from other hostel owners vary from four to twelve violent robberies.

Despite the most recent and most violent case, the hostel association member claims La Candelaria is improving. While attempting to save his neighborhood and livelihood from falling victim to armed bandits, the hostel owner said the tourist district has "already hit rock bottom; it's going to go up."

It's hard to do anything once determined thugs like this are in your room. Even being passive and handing over all your valuables might not satisfy their criminal intent.

The best course of action is to stop them getting into your room in the first place (of course determined criminals will get in regardless of what you do). A simple door stop takes up no room in your backpack, but is very effective at keeping a hostel door closed. At least you might earn a few seconds to make your escape out a window.

Before you check-in ask the hostel what security arrangements they have, and what they've done to beef it up since these attacks started. If they've done nothing, pick one that has - the others will soon realise they need to act or lose business.

Consider staying somewhere other than the La Candelaria district. It might cost a few more of your precious travel dollars, but it's better to be safe than sorry. 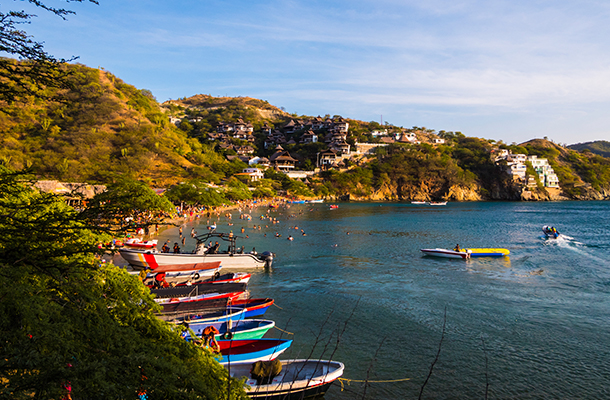