Is Ecuador Safe? What You Need to Know About Crime

Ecuador isn't without pickpocketing and crime, but just how much of this is a threat to travelers? With a little common sense and a few tips, you can have a trouble-free trip.

From the Galapagos Islands to the incredible Andes mountains, Ecuador is an exciting destination to travel. Whether you're planning to visit to work on your Spanish or for a taste of adventure, there are a number of safety concerns for travelers to keep in mind.

Overall, Ecuador isn't the safest of destinations, but if you use your common sense and avoid traveling to places that are known as dangerous, you'll no doubt have a safe trip.

Due to civil unrest and protests in late 2019, travelers have been told to exercise a higher degree of caution. If you see a protest or large gathering of people – walk the other way.

The old part of Quito is beautiful, and parts of it are World Heritage Listed, making it no surprise that the city draws huge crowds of tourists. Pickpockets love crowds, so be aware of your surroundings and belongings.

This is also one of the poorer parts of town. Try to avoid the area at night, unless you're traveling in a large group, with a local friend or as part of a tour.

The modern section of Quito, La Mariscal, is also potentially dangerous at night. Call for a taxi rather than opting to walk back to your hotel.

Transport terminals are always a magnet for pickpockets and petty thieves, so take extra caution there too. Quito has a tourist police force, easily identifiable by their neon yellow vests and gray uniforms. If you need help or need to report a crime, seek out the police.

Valuables such as cell phones, laptops, tablets, cameras and cash are lucrative to petty thieves in Ecuador.

The emphasis is on the petty part of petty crime. While it may be frightening when a knife or gun is produced, violent crime is rare. Unlike other South American countries where violent crime rates are higher, in Ecuador the weapon is usually just a way of intimidating the victim.

The best response is compliance – don't fight back or resist, hand over your valuables and live to tell the tale.

Taxi robbery is a danger in Quito, Guayaquil, Manta, Machala, Playas and other coastal towns. You hail a cab, hop in and a few minutes later you're joined by some less-than-friendly fellow passengers who want your money. They may even take you on a tour of the local ATMs, which is not a great way to see the city because it'll cost you everything in your bank account.

Read more about secuestro express in this article about safety in Colombia.

The north end of the Malecón 2000 near Las Peñas, outside the San Marino Mall, and the Urdesa restaurant/bar district are known spots for taxi robbery.

The US consulate in Guayaquil forbids its staff from hailing cabs on the street, including yellow cabs, because of the risk of taxi robberies.

They insist staff use "vetted taxi services" if you want to be ultra-safe, you can use the same services: FastLine, Solservice and Wayose.

The Pichincha volcano is located on the western outskirts of Quito, and has a great view of the city from the summit – when it's not erupting, of course. The last eruption in 1999 covered the city in ankle-deep ash.

For a long time, Pichincha was known as a crime hotspot, but the Ecuadorian government took action and now the weather and poor fitness levels are more of a threat than crime.

However, if you are concerned about hiking it alone, plan to take the trip up on weekend mornings when plenty of other people are out and about. The weather tends to be better in the morning, and if you do need help (medical assistance), there are people around.

Go with a group, and remember to take it slow – altitude sickness can affect even the fittest of visitors.

Crime in Guayaquil make this port town a little unsafe. It has similar issues to Quito, but the petty crime is more prevalent. Avoid the poorer areas, especially El Guasmo district. Take caution as you travel in downtown or southern areas, and on public transport in the city.

In addition to the pickpockets and scammers – watch out for trickery when mustard/ketchup being squirted on your pants to distract you – some of the biggest crooks in this town are the friendly experts who'll tell you they can get you a great deal on a Galapagos Islands cruise, then whack an enormous mark-up on the real cost.

By using some common sense, you can experience Ecuador's cities safely:

Get a travel insurance quote for Ecuador Listen to this episode of the World Nomads Podcast on Ecuador and discover the strict rules for visiting the Galapagos Islands and the volcanoes that rival Mt Fuji. One of the greatest natural wonders on the planet, the Galapagos is a must see for any traveller to Ecuador. Here's how to enjoy the natural beauty safely. 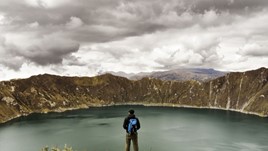 Ecuador - How to Stay Healthy While Traveling

Altitude sickness, diarrhea and many other maladies can befall any traveler in Ecuador, but there are things you can do to stay healthy during your stay in this picturesque country.