What You Should Know About Landmines in Cambodia

A lasting legacy from conflicts past, much of Cambodia is littered with landmines. We take a look at the impact and what you need to know to stay safe while traveling.

The evidence of these dormant dangers strewn about the Cambodian landscape can be seen in the streets of large cities like Phnom Penh, as well as the tiny rural villages in the surrounding countryside; Cambodians, old and young, with missing limbs.

Where Are the Landmines in Cambodia?

The mines were spread throughout the country over several decades, the result of constant warring between the Khmer Rouge and its opposing factions. Even the Vietnamese had a hand in placing a vast number of the devices along with the United States who dropped many different mortars, grenades and bombs during the Vietnam War which now lay dormant across the country, particularly close to the border with Vietnam.

These days, accidental explosions do still occur, with a significant portion of the land which is suitable for farming still inaccessible. Mines are even found in the streets of small remote townships, with unsuspecting locals living on top of them for years before they're discovered.

How Are They Being Removed?

Over time, the removal of landmines and UXO's has become safer and more refined. Back in the initial days, it was trial and error but now with the advent of better detection technology and skills, there are considerably less demining personnel being injured or killed. In one demining program, they have also chosen to enlist the help of the animal kingdom to find and remove mines safely.

Since 2016, Tanzanian organisation, Apopo, working alongside the Cambodian Mine Action Center have put Gambian Pouched Rats (African Giant Pouched Rats) to work sniffing out landmines and UXO. Due to their small and lightweight size, they are able to search across unchecked areas for landmines removing the risk for humans whose weight would set a landmine off. These amazing rats are trained to sniff for TNT explosives with accuracy and can search 2152 square feet (200 square meters) in just 20 minutes rather than the 1-4 days it would take a person

As of August 2017, these furry little heroes have sniffed out more than 4,500 mines and over 36,000 bombs, grenades, and bullets. Pretty impressive!

Additionally, Cambodian Mine Action Center uses sniffer dogs and has its own breeding program set up to continue the next generations of front line detection dogs.

Locals are also being educated by demining organisations on the risks of landmines and UXO particularly in eastern Cambodia where the concentration of devices is higher.

With the increase in demining initiatives across the country, the rate of casualties has reduced considerably. From January to November 2017, 51 people were either injured or killed by landmines or UXO's compared to 77 from the same period in 2016. In 2015, 111 people were impacted by mine or UXO explosions.

The Cambodian Mine Action Authority reports that 64713 people have been injured (including amputation) or killed since 1979 when the Khmer Rouge lost power due to the invasion of Cambodia by Vietnam.

How to Avoid Landmines

For tourists, the threat is much less than what the locals may contend with. The main routes are all well worn and the cities are largely untouched by the problem. It's when you step outside the main tourist areas that you're taking a risk, so here are a few considerations you might want to take on board before you head off to explore the unexplored on your own.

Temples Are Targets Too

Because landmines were strewn indiscriminately around the Cambodian landscape, they frequently turn up in unexpected places. Temples, in particular, were popular targets for the enemy, so tourists heading off for some sightseeing are well advised not to wander around in the surrounding undergrowth near to religious icons and buildings.

Temples were also used as places to store ordnance during the Khmer Rouge era with many sites scarred by explosion burn marks and damage, even bullet holes.

Over the years and tragically by trial and error, the locals have learned where it is safe to walk, so take a guide (it helps the local economy, too) if you want to see more of Cambodia's amazing sights outside of the city areas.

Bear in mind that one reason there are so many landmines still covering Cambodia is because no one really knows where they all are. They were laid by so many different groups, none of which documented their whereabouts, that they cannot be catalogued now. Hiring a guide is no guarantee against the threat of mines, because the chances are your guide won't have a clue where they're laid either but they give you a better chance of seeing the out of town places more safely than flying solo.

Although landmines weren't mapped when they were placed during the wars, it's widely known that the vast majority were placed along Cambodia's northern border with Thailand. You won't find maps pinpointing the exact location of these nasty little devices, but you can avoid them by only crossing the borders (or travelling near to the border) using recognised roads.

Ever wondered what a landmine looked like up close and personal? If you take a 30 minute trip north outside Siem Reap you'll come to the shanty home of Aki Ra, a former child soldier for the Khmer Rouge who started the Cambodia Landmine Museum.

Using skills he learned working alongside the UN, Aki Ra has been finding and deactivating landmines in Cambodia for over a decade and a half. His huts are full to the brim with numerous types of incendiary devices which are a chilling advert for the cruelty of war. In addition to the museum, the organisation runs a relief centre which provides education and shelter to local children who have suffered from the impacts of landmines and illness. They also have a farm project which assists and educates locals with growing crops and a demining initiative which focuses on removing mines around small villages near the museum and in other provinces.

Staying Healthy in Cambodia: How Not to Get Sick

What vaccinations do you need? Can you drink the tap water? Stay healthy while you travel with these tips to avoid health hazards and disease in Cambodia. 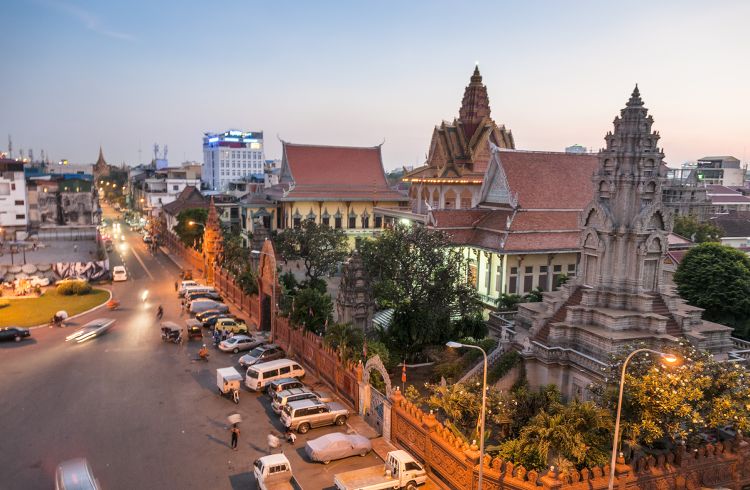