Crime and theft in Myanmar

Even petty crime, like pickpocketing and purse snatching is rare, likely due to the country's strict penalties it imposes on criminals. Police presence is prevalent, with many stations boasting large signs in English that read, "May I help you?"

Yangon is an area that sees a bit more street crime than other regions, and some believe that the economic situation and the rise in inequality are contributing to an increased rate of theft related incidents, though there is no hard evidence to support this.

Standard safety measures should be exercised, such as keeping valuables concealed and a firm grip on bags, just in case. There have also been a few reports of vehicles being held up at night by bandits, in the areas of Tanintharyi and Taungoo.There is no indication, however, that foreigners were targeted in these crimes.

The Myanmar-Thai border can be a hazardous location due to army presence and drug activity, but police don´t allow foreigners to go to areas where there is even a small risk of violence. Burmese people know that tourism as a very important part of the economy, so they are doing everything they can to make sure tourists are safe.

Touts and pests in Myanmar

While not necessarily dangerous, touts approach tourists and "recommend" a particular hotel. When you tell them you’re already staying somewhere else, don't be surprised if they try to dissuade you, and say the place you've chosen is "no good" or that "foreigners can't stay there".

Touts make their money by collecting commissions from the hotels they direct visitors to. If you know where you want to go, politely but firmly tell them, and they'll back down and let you carry on your way.

Compared to other parts of Southeast Asia, this really is a minor problem in Myanmar – you may not ever come across a tout in your travels here.

If you have the opportunity to travel widely in Myanmar, it´s likely that you will feel a big difference between the ‘big four’ (Yangon, Mandalay, Bagan and Inle lake) and other remote areas.

When traveling through Yangon, Mandalay, Bagan or Inle Lake, vendors will likely increase their prices, trying to scam tourists into spending more for what they buy. While in remote areas, the prices will be incredibly fair, and the locals will be transparent about prices and recommendations.

Bagan is the worst of these places, by far the most touristic area in Myanmar, where you might find a few rude and pushy locals trying to guilt-trip you about their poverty, just to get a few extra-dollars.

Although this will make you feel uncomfortable while you’re there, there is no threat to your safety. Simply walk away without playing their game.

Just don’t let these scammers change your view on the lovely people of Myanmar. 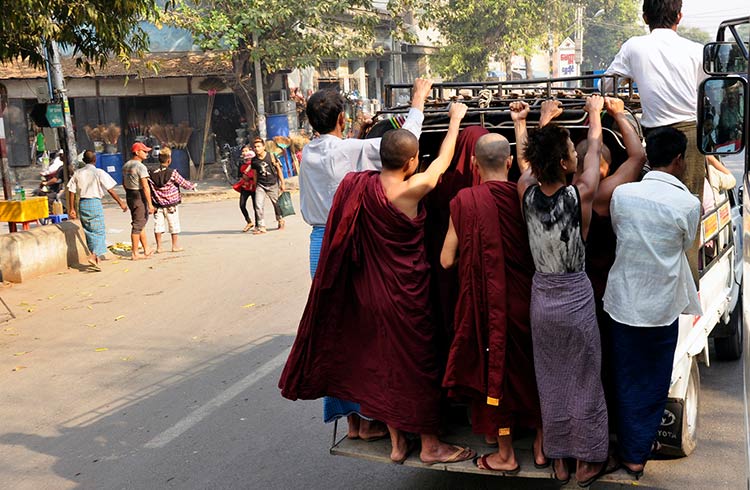