Zimbabwe is largely safe for travelers despite the political tension which has gripped the country for decades. We take at look at the situation and what you need to know before you go.

UPDATE: Zimbabwe is currently experiencing shortages of food, fuel and money plus outbreaks of cholera and typhoid. For more information, visit our Travel Alerts page.

Zimbabwe was once an African powerhouse, a nation at the forefront of regional politics. But over successive decades, its become a country in political turmoil, split by Robert Mugabe.

But it does remain one of Southern Africa's highlights, so if you are happy to brave the political instability, then Zimbabwe may be a perfect location.

Is Zimbabwe safe to travel?

Most foreign departments warn about travel to Zimbabwe, telling tourists to reconsider their need to go there.

And the problem is this crime doesn't seem like ending soon, with civil unrest now a major part of Zimbabwean society.

Political and social conditions are volatile and the security situation could deteriorate with little warning.

In light of the political tensions, public demonstrations, street rallies and any political gatherings have occurred frequently. It's best to do whatever you can to do avoid large crowds.

African politics are often hostile and violent and can turn into dangerous situations for travelers very quickly.

If peaceful rallies do turn violent, police and security forces are likely to respond with violence.

On most occasions, demonstrators and bystanders are hard to distinguish and people can be hurt or killed.

And as a blanket rule, never photograph or video rallies or political gathering. Security forces are likely to target you.

Always remember, violence can escalate very quickly and Zimbabwe is definitely a hotbed for this style of danger.

Members of the security forces, so-called "war veterans" and youths associated with the ZANU-PF have in the past beaten and tortured opposition supporters, civil society activists and human rights defenders.

Residents have been known to be arrested for no reason, so don't become involved - the situation could become fatal.

What should you do to stay safe?

Remain vigilant and avoid high-density (lower-income) urban areas because of the potential for the security situation to deteriorate.

Local protests against governments can spiral out of control in these poorer areas, so just be aware of where you are.

Luckily as a traveler, you won't find yourself in these areas too often, but it can happen, so check local politics if you can.

Because of possible disruptions to the supply of goods and services, we recommend you have with you a supply of water and food to last several days.

This is a drastic measure, but every traveler should carry some sort of basic first-aid kit.

In Africa, you will use some sort of first aid.

Ensure your vehicle has an adequate supply of fuel and ensure mobile phones are fully charged.

Zimbabwe is a country that has suffered due to its leaders. This has made the country, particularly rural areas dangerous to travelers.

Land confiscation, forced displacement, looting of crops, theft of cattle, poaching of game and violent acts against farmers, their families and workers are common in some areas of the country.

So prepare by researching - don't go into an area with your own political views. In other words, know your audience. Zimbabwean police aren't friendly to dissidents.

Southern Africa is relatively safe compared to other areas of the continent, but Zimbabwe has experienced trouble over the last few decades, and the turmoil isn't over. How to Avoid Diseases & Stay Healthy in Zimbabwe

Medical facilities in Zimbabwe are limited, so it's a good idea to avoid getting sick. Find out how to avoid common illnesses with these travel health tips. 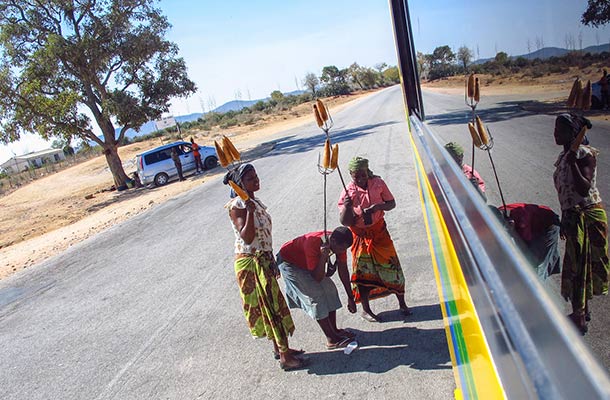 Zimbabwe's Transport - Tips on Getting Around Safely

Zimbabwe in African terms is a paradise. It's a country of abundant wildlife and amazing environments, although getting around the country to see all these amazing areas can be quite difficult and frustrating.