After cycling from Alaska to Argentina, Gregg landed in Bogota where his love for film, photography and storytelling led him to starting up his own visual storytelling agency. We caught up with Gregg to learn more about what it takes to become a great visual storyteller.

What is visual storytelling?

Visual storytelling is a term that’s become popular over the past five years or so to describe the disciplines of photojournalism and videography. There’s a trend among commercial clients who want their brand story told in an authentic way, akin to how a photojournalist would work. Visual storytelling is often used to label this type of commercial work. Something that I always like to articulate to clients is that storytelling is different than content production – it requires an actual story. Bob Dylan’s songs are different than elevator stock music. He is an artist, a master storyteller, and his work makes people feel something. David Alan Harvey is a master photojournalist. His photos are a result of innate talent to read people and anticipate moments. Most of his photos can’t be replicated. They are different than stock imagery made for Instagram. Again, they make people feel something. In my opinion, the true roots of storytelling come from art and journalism – they require an innate talent to execute. Think of your friends, is there someone you know who always has the best stories around the campfire?

How did you break into visual storytelling?

In 2005, I decided to sell my home, car, and most of my physical possessions to bicycle through the Americas. Along the way, I picked up a camera so that I could upload images to a monthly blog I’d created for the trip. I decided to enter one of my pictures into the Seattle Times’ photo contest and it was featured in the paper. Shortly afterward, an editor from National Geographic Adventure Magazine emailed and asked if I’d be willing to send a few more photos and blog posts from the trip – and they ended up publishing them in the magazine. I never looked back.

Tell us about your storytelling style?

My storytelling style comes directly from lessons learned during my bicycle trip through the Americas and a photojournalism mentorship I received from National Geographic. For example, I always prefer to be light and fast with my gear. This comes from the fact that I didn’t have the physical space to lug a bunch of heavy camera equipment on my bicycle. My gear had to fit in a small handlebar bag with just enough space for a DSLR camera and one do it all 28mm to 300mm lens. This forced me to always have my camera easily accessible and to focus on moments rather than fiddling with complicated setups or constantly changing lenses. During my mentorship with National Geographic, I learned from Rich Clarkson, William Albert Allard and other icons of the photojournalism world that curiosity, capturing moments, and building a visual story matter so much more than gear. Equipment is important for sure, but without a compelling story, it's just electronics.

What are the challenges of running your own production company?

My biggest challenge is stepping back and letting my team do what they do best. I remember the first time we had two productions happening at the same time – one in Jamaica and the other in the Brazilian Amazon. I decided to fly to Jamaica for three days and then on to the Amazon for 10 more days. I couldn’t imagine not being personally involved in both projects, so I struggled trying to be in two places at the same time.

What I learned is that my time would have been better spent back at the office, or focusing on just one of the projects. I also learned that I need to trust my crew and embrace their varied storytelling styles. Everyone has a different way of interpreting and capturing a story through their unique viewpoints. A video or still camera is truly a mirror reflecting the operator’s soul. Now, I cherish and value sending off a budding videographer to some far-flung place, and watching him or her grow and come back with their unique vision of the world as much, if not more, than going on a shoot myself.

Tell us about a memorable assignment

My most memorable assignment came purely by accident. I was covering the world’s most grueling bicycle race called La Vuelta a Colombia. During the three weeks, I spent on the road covering the race, I became close with a rider who grew up in a small mining town outside of Medellin, Colombia. He told me that he saved the money to buy his first bicycle by working in the rough and tumble coalmines on the edge of his town. After the race, he invited me to visit. The mines were terrible, sketchily built by hand, and I was out of my mind with anxiety as we descended 600 meters through the earth on an oil barrel sled attached to a rope and small motorcycle engine. The working conditions were appalling. The air was wretched, there were tons of bugs, and it was excruciatingly hot. And then this worker appears out of the darkness and he tells me he’s coaching a team of amateur riders who all work in the mines. They’re called the coalmine bikers. They commute to the mines on their bicycles and do cardio intervals during lunch break by crawling up and down the mineshafts on all fours. Eventually, Bicycling Magazine picked up the story and ran it as a feature article.

This assignment taught me the value of connecting and listening to your subjects and trusting in serendipity. You never know when a story idea can strike. I always surrender myself to what the universe presents me.

What skills are most important in this field?

The number one most important skill for a storyteller is to be a nice person. Subjects and co-workers always respond better to nice people – there is no room for assholes on any of our productions. The next skill I look for is curiosity. If I hire someone whose both a nice person, and has a strong sense of curiosity, I can be confident that they will come back from an assignment with an incredible story.

What makes a good story?

There’s a phrase that a retired Russian military captain told me after I met him in a campground in Alaska during my bicycle trip, “Adventure is misery and discomfort relived in the safety of reminiscence.” A great story is often terrible when it is actually happening, and only great in retrospect. Good stories reveal the wounds of their subjects; they expose both highlights and hardships. The hashtag for our agency is #feelsomething. If one of our stories doesn’t make viewers feel something, if it doesn’t connect emotionally, then we start over.

What tips do you have for aspiring visual storytellers?

1)     Be nice. Your subjects and your crew will always respond better to nice people.

2)     Be curious. Curiosity is the number one trait I look for in potential storytellers.

3)     Fail. People who go out in the world and completely fail in their attempt to tell a story develop as storytellers – those who play it safe typically stagnate.

4)     Read books. Listen to music. Learn from the best storytellers who use words and rhythm rather than visuals to make people feel something.

5)     Go make stories. Practice, practice, practice. Tell your friends at a bar a story, cut something for Youtube, write in your journal. This is not a job, it’s a         lifestyle. It’s who you are.

What's the future of travel filmmaking?

Storytelling is often confused with the other industry buzzword: content. Do not confuse the two. Content can be anything under the sun. A hodgepodge of images against a soundtrack is content. An aerial video of random drone shots is content. I often refer to these types of travel videos as visual postcards. For something to qualify as storytelling you actually need to be telling a story. I think that brands are starting to distinguish between stories and content – which is critical because as journalism outlets continue to see their budgets slashed, brands are now commissioning visual work. It’s important for the editors and decision-makers of these brands to take the responsibility to communicate to their audience what is content, and what is a real story. In the future, I think we will see a return to the roots of journalistic values across all disciplines of storytelling to rekindle trust with the audience. I also think that immersive, 360 video will play a more important role in travel filmmaking.

Or watch our Travel Documentary Masterclass for more exclusive advice. 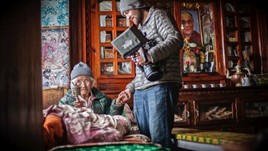