Is Medellin Safe? Everything Travelers Need to Know

Find out why a trip to Medellin is an essential part of your Colombian itinerary, and why you've got very little to worry about.

Walking the streets of Poblado at night, we were feeling safe. Aside from receiving the side eye from a few shady characters that night, our time in Medellin had been nothing but a pleasant surprise. Safe to say, my husband and I were really glad we'd ignored all the fear-mongering articles about travel to Medellin.

Following decades of civil war, where drug cartels and crime rates made Medellín one of the most dangerous cities in the world, the Colombian government has done a great job of combating crime since the Escobar days.

In 2012 Medellín was among 200 cities nominated for Most Innovative City of the Year following incredible advances in transport, connecting the city via a metro system, bike-share programs, and the construction of new facilities such as library parks and cultural centers.

But, just how safe is Medellin for travelers, and is there anything to worry about?

Medellin was once the home of Pablo Escobar and his drug cartel. This was the biggest criminal network in the world at one time and responsible for smuggling 15 tons of cocaine a day. Outlaws ran the town and the city was without law. Murder, shootings, kidnappings and general mayhem made it a dangerous and unpleasant place.

The drug barons are gone now. The last of them were rounded up in 1993, but the city still has its crime problems, mostly to do with systematic poverty rather than drug trafficking, which has allowed the Aguilas Negras (gangs) to flourish. In 2009 there was a sharp increase in homicide with more than 2,000 killings in a city of three million.

Despite this, the incredible metro and cable car system has been off-limits to gangs and criminals. There is a great sense of pride in the public transport system, which has transformed the lives of tens of thousands of people living on the outskirts of the city. Travelers should use the metro system to get around Medellin, where you can see the city from above, and easily get around to various neighborhoods.

Keep in mind, if you want to do a walking tour of Comuna 13, do not go alone. There are plenty of locally-run walking tours available, such as the Comuna 13 Graffiti Tour, where local guides tell you about the inspiration behind the art, and give insights into the community's history.

If you decide to travel to Medellin, no matter where you go and what you do – whether you're walking the streets or riding the cable car – be discreet with your phones, cameras and of course your money. Never talk out loud about the city's history, and it goes without saying, never make any jokes or be too intrusive with questions.

Always show respect, and get to know the city through the perspectives of a local – whether that's a walking tour or getting to know someone you've just met. Local guides will open up about their family history and talk about the changes they've seen in Colombia over recent years. Afterwards, ask your guide where you should go next – they'll know all the good bars, where to get a good meal at a good price, and of course which neighborhoods have interesting things to see.

If you don't do any walking tours, ask your accommodation staff for suggestions – after all, they live here.

Research which neighborhood to stay in

Before traveling to Medellin, we did lots of research on the safest neighborhoods to stay, and the dodgy areas to avoid.

We stayed at the Ivy Hostel, in Poblado, close to stacks of bars, restaurants and clubs and other hostels. But, as this is a traveler hub, it's not the best place to get a real sense of the city and local life.

To the south of Poblado is Envigado, a more residential neighborhood where height restrictions for buildings make this a pleasant place to stay without towering buildings all around. Laureles is a more laid-back neighborhood, and sits beside Atanasio Girardot Stadium where the local football teams play.

When visiting Medellin you'll no doubt want to visit El Centro, where you'll find Parque de Las Luces, Antioquia Museum, Casa de La Memoria and Botero Park. However, this is a rough part of town, and not the best place to book accommodation. Instead, stay elsewhere in the city and catch the metro here to check out the attractions during the day.

The good thing about Medellin is, it's so easy to get around. No matter which neighborhood you stay in, you'll be a short walk from the metro.

There are no travel warnings or alerts to suggest traveling to Medellin is dangerous, so if you keep a low profile and all your valuables in a safe place, you'll have no problems exploring this vibrant city. 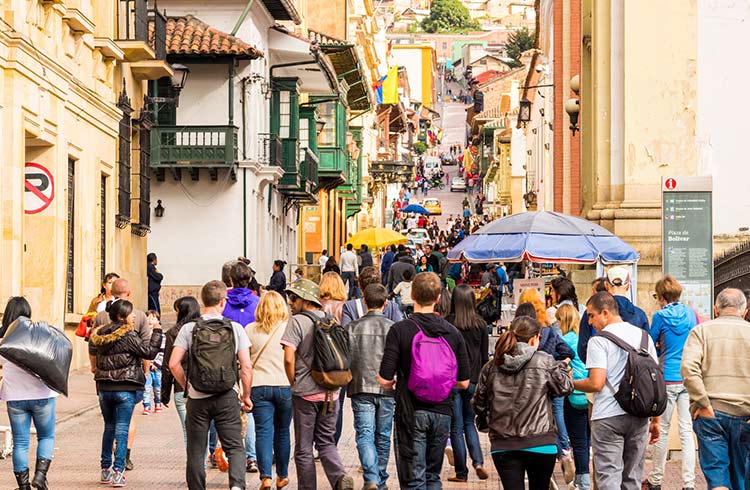