In 2017, Hurricane Irma unleashed widespread destruction on this island paradise. Traveling there in 2018, Gary Meenaghan found signs of the storm all around. Here’s why he feels Barbuda is still well worth a visit.

Barbuda, with its pink-shell beaches and picture-perfect palm trees, was Princess Diana’s East Caribbean escape whenever she sought to lose the paparazzi. Now, two years since Hurricane Irma, it’s an island trying to repair its recent past and recover a paradise lost.

Part of the Lesser Antilles, and located on the outer arc of the West Indies, Barbuda was directly in the path of the Category 5 storm. When Irma visited in the early hours of September 6, 2017, Barbuda suffered 95% devastation. Winds of up to 185mph (298kph) decimated everything from homes and hotels, to schools, the airport, and the community’s only hospital. Neither running water nor electricity survived, and the island’s steel phone tower folded in two as if it were made of chicken wire. The Prime Minister, Gaston Browne, called the island “uninhabitable” and ordered its 1,500 residents be evacuated.

The island and its people are rising again, but it has been a slow process. When I visited with my young family in November 2018, officials estimated 75% of the population had returned. Yet as we arrived for a day trip, no other travelers were on the catamaran that shuttles passengers between Barbuda and its sister-isle Antigua. Instead, we bounced up and down alongside only sleepy-eyed laborers and smartly dressed NGO workers.

It was a sharp contrast to bustling Antigua, 39mi (63km) south, which avoided severe damage by Irma. Much of Barbuda still felt barren and broken. Flooded dirt roads forced our driver to weave between potholes, uprooted trees, boulders, and wild donkeys. Fences lay flattened. Abandoned beachside cottages featured thick cracks running across their interior walls like varicose veins. A grandiose hotel close to Pink Sand Beach sat empty, save for a chandelier made of shells.

Yet, despite all this, it’s possible to enjoy Barbuda's unrivaled beauty – and in doing so, pump a little money into an economy in desperate need of exactly that. 4.5mi (7km) south of the ferry terminal, on deserted Princess Diana Beach – so named in 2011 to mark what would have been the late royal’s 50th birthday – we sipped from coconuts hand-picked by our driver and swam in the crystalline Caribbean Sea. We snorkeled with schools of tropical fish, and with a bit more luck, would have been able to spot sea turtles, barracuda, rays, and a variety of other marine creatures.

Back on land and alone for as far as the eye can see, it’s easy to pretend you’re shipwrecked on an uninhabited island. Condé Nast Traveler named Pink Sand Beach the 14th most beautiful in the world, while at the lagoon close to Codrington, Barbuda’s largest town, you can find the largest frigate breeding and nesting colony outside the Galápagos, with around 2,500 birds.

Happily, it’s not only the birds who are flocking back. As of September 2019, half of the island’s 1,200 properties have been rebuilt, according to Prime Minister Browne. Accommodation options remain limited, but they never were abundant. Beach bungalows have reopened, there’s a handful of homestay and Airbnb options available, and a luxury resort located at the northern end of 11 Mile Beach has reopened to rapturous international reviews. Princess Diana Beach has started hosting idyllic weddings again, and popular steel-band music nights and Caribbean cooking classes have even returned to the island.

If in doubt that even a basic day trip can help a community back on to its feet, consider this: as we headed to the wharf to catch the catamaran back to Antigua, our driver stopped at his house to drop off some construction materials. Exiting his black pick-up, he motioned towards the empty shell of a suburban bungalow; its roof just a series of exposed wooden rafters. “That’s home,” he said. “But until I can afford to finish the repairs, I sleep there…” We followed his gaze to the right of the house, where a white, UN-provided tent stood erect in the garden.

The Barbuda Express – catchphrase: “A to B by Sea” – leaves from Antigua’s Heritage Quay six days a week at 7am, takes 90 minutes, and returns at 4:30pm. A round trip costs US $55. It’s often possible, and sometimes cheaper, to charter a 15-minute flight from Antigua for up to six people.

As of September 2019, day tours can be organized for US $145 per person and include the ferry, a lobster lunch on Pink Sand Beach, and visits to the Frigate Bird Sanctuary, Princess Diana Beach, and various caves with petroglyphs and stalactites. See Barbudaful.net for more details. 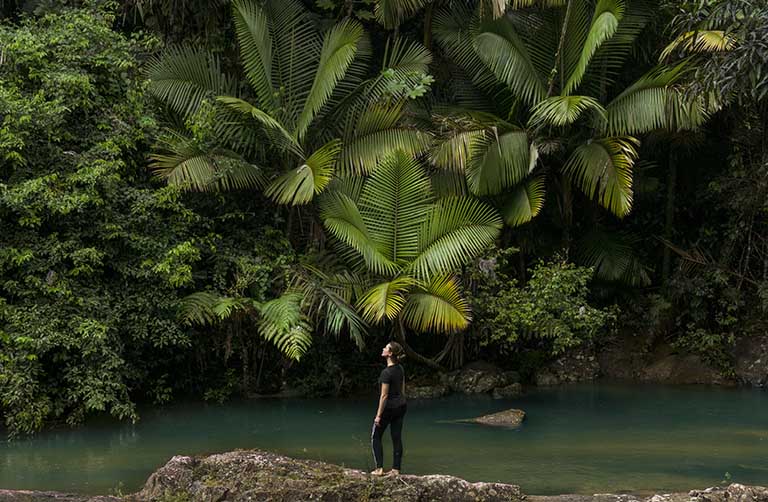 How to Travel Responsibly in the Caribbean