Into the Deep: Scuba Diving the Great Wall of China

Each year in northeast China, more than 10 million visitors, many cascading from coaches before following flag-wielding tour leaders, arrive to explore various sections of the Great Wall of China.

Unfortunately, it is now possible to scoff a Burger King Whopper or slurp a Starbucks cappuccino before climbing the most popular sections of the ancient, 13,000mi-long (21,000km) structure, the origins of which date back to the 7th century BC. Adapted by various dynasties over the centuries, largely to keep marauding forces attacking from north of China at bay, the wall is one of the most impressive architectural feats ever achieved.

It's very easy to travel to the Great Wall in a minivan from Beijing before walking along it for a few hours taking photos. However, few visitors are aware that they are also allowed to scuba dive through some of its underwater turrets.

In 1976, the Panjiakou Reservoir, around 100mi (160km) northeast of Beijing, was built to provide a new water source for the capital following an earthquake that caused water supply infrastructure damage. Forming the new body of water meant submerging a section of the Great Wall. The result is the bizarre sight of a craggy wall section, created during China’s Ming dynasty (1368 to 1644), plunging into the murky grey-green reservoir, then rising from the water 330ft (100m) away.

The site is now a mecca for scuba divers, surely representing one of the most unique travel experiences in Asia. However, with dives here rarely going deeper than 55ft (17m) underwater, dive trips are suitable for those with PADI Open Water certificates.

“The Great Wall of China is the only Wonder of the World that you can actually dive,” says Steven Schwankert, the New Jersey-born founder of SinoScuba, a dive company that takes around 50 divers a year to the site.

After a drive of around three hours from Beijing, in a van heaving under the weight of air tanks, Schwankert and I arrive at Panjiakou. It’s an eerily impressive place, the vast reservoir flanked by hills dotted with ancient Great Wall watch towers. Historians believe that this section of the wall was built during the Ming dynasty and was adapted in the 1570s by Qi Jiguang, an army commander.

Historian William Lindesay, who has walked the Great Wall in its entirety, explains that much of the wall here was damaged in the 1930s during the Second Sino-Japanese War. “The wall section occupied the high ground then, it was useful even in the age of mechanical warfare,” he says. “Any ground army would have had to pass through the mountain via those passes. They were strongly fortified and in good repair since the Ming dynasty – the towers had ready-made garrison posts for machine gunners and the like.”

Now, all is peaceful here. Fishermen stroll by, carrying plastic bags stuffed with flipping fish. We take a small, smoke-burping fishing boat to the submerged wall section and tool up on the wooden planks of a rustic restaurant, raised above the drink by stilt-like wooden poles.

There are few signs of marine life beyond the occasional dead fish head floating by. Schwankert says that there are a few fish around here, lucky escapees from nearby keep nets. “You can be diving next to the wall and suddenly see a flash of scales,” he says.

We walk into the cold water, slowly following the uneven rubbly wall as it disappears into the murk. “Diving the wall, getting this 360-degree view, really makes the structure feel more human,” Schwankert says before we descend. “You get a sense that people built it, that people were stationed on it.”

We hold onto the wall as we go under the surface, looking down through our masks at the utter blackness beneath us. The bricks are slimy, and occasionally I see small shrimp ambling on them.

Underwater Section of the Great Wall of China

Having walked on the Great Wall many times, it is surreal to now be floating next to it.

We reach an archway and I follow Schwankert as he propels himself through the shadowy gap between the bricks. Archways such as these are rare on the wall – they were considered points of weakness when defending against marauders so were rarely built. The luck of them being here creates a doubly unique experience, among the fridge-cold chill of the reservoir water.

I surface feeling exhilarated, unsure if I’ll be able to enjoy a conventional day trip to the Great Wall again. I ask if we can return to repeat the dive soon. Schwankert explains that even further down there is a submerged village and train bridge, that he is yet to visit.

The village is, he explains, found at “yikes” diving depth. “I’ve never seen it but I’ve seen photos and it seems to be in a state of preservation,” he adds. “You could technically do it on air but you’d be pretty loopy by the time you got down there.” Maybe next time. Learning the Art of Ancient Crafts in Suzhou

In Suzhou, near Shanghai, Sharon McDonnell learns about the incredible work that goes into olive-pit carving, fan making and silk embroidery. 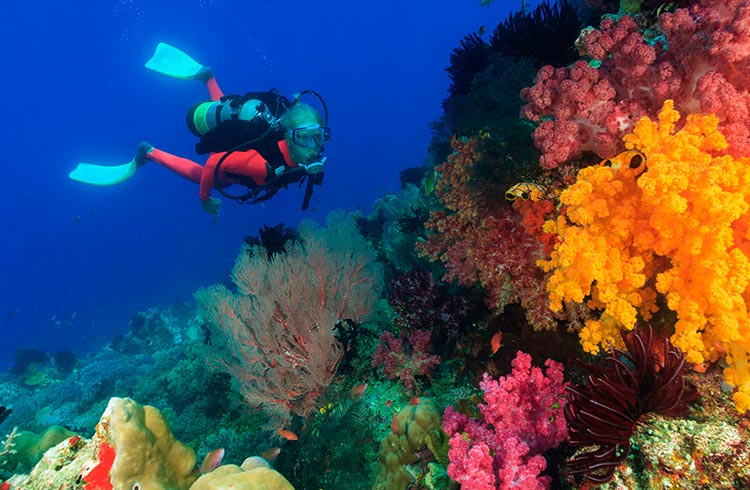