Join nomad Emerson on a journey through some of his favorite nature reserves, hiking trails, historic towns, and off-the-beaten-path places in this little-known Spanish region.

Time slows down as soon as you set foot in Spain's most undiscovered region, Extremadura. But before you start exploring, take a few minutes to connect with the surrounding nature. Breathe deeply the Mediterranean forest’s pure, scented air, cross barefoot the closest cold-water stream, and become aware of the silence while contemplating the dark green slopes that skim the clear sky on the horizon.

Then, you’ll be ready to visit Cáceres and Badajoz provinces – Spain’s two largest – that make up Extremadura.

I was raised here, and I couldn’t think of a better way to get inspired to write this article than to travel back home.

Landscapes and parks in Extremadura

Distance allows us to see things from different perspectives and rediscover, as travelers, the places we visited long ago as locals. This happens whenever I go back to the timeless and underrated Extremadura.

I remember with affection the spring day my best friend Alberto got his driving license, and we went on a road trip to Valle del Jerte. We left Plasencia’s Valcorchero granite outcrops and reservoir, following the winding river until we sighted the marvelous cherry blossom valley in all its splendor – and dare I say it rivaled Japan.

This is not the only breathtaking place in the region – 31mi (50km) to the south, is the UNESCO Biosphere Reserve and National Park of Monfragüe. Located in the very heart of Cáceres province and crossed by the Tagus River, it’s among the best places in Europe for wildlife spotting (such as wild boar, red fox, and otters), birding, and stargazing.

To see why the Arabs called this place The Abyss, venture along the 10mi (16km) internal Red Route via El Salto del Gitano lookout, reaching the 9th-century castle watchtower for sunset. An unforgettable experience.

I also love the surreal aragonite crystal formations of the cave of Castañar de Ibor and the ancient, Appalachian-type landforms at Villuercas Ibores Jara UNESCO Global Geopark, about an hour’s drive southeast of Monfragüe

I've found that most people I've crossed paths with can’t locate Extremadura on a map despite having visited Spain, and I don't blame them. It’s easy to overlook that a country is more than just its capital and major cities.

But here, far from Madrid and Barcelona, the rich legacy of Vettones, Romans, Visigoths, Muslims, Jews, and Christians can be found all over the territory and has influenced the culture, architecture, gastronomy, and traditions of western Spain.

I like to walk the Ruta de la Plata pilgrimage path with a twist: paying homage to Extremadura’s World Heritage sites. I start by visiting the well-preserved Roman Archaeological Ensemble of Mérida, whose origins date back to 25 BC, and then the harmonious architectural amalgam of styles of the Royal Monastery of Guadalupe and Old Town of Cáceres.

Forget about maps after passing through the impressive Arco de la Estrella – the main gate to the walled enclosure. To find Cáceres’ hidden gems, just walk around its intricate alleys and ask locals for the places they love. Mine are by Cuesta del Marqués: Yusuf Al-Burch Arabic Museum House, the views from San Francisco Javier Church’s bell tower and Baluarte (bastion) de los Pozos and Olivar de la Judería park.

Last but not least, there’s Plasencia, where my home is. Within the old city walls are renaissance palaces, Romanesque churches, a Jewish quarter and a cathedral complex with priceless artistic wealth, whose peculiarity is to have an unfinished Plateresque New Cathedral attached to the Old one.

To chase away the evils and leave the past behind, Piornal villagers throw a few thousands enormous turnips at Jarramplas, a (perhaps not so fortunate) neighbor who personifies a cheerful devil and goes around the city beating a drum each 19th and 20th of January.

Across the mountains in Valle del Ambroz, Hervás remembers and relives the period of coexistence between the Jewish and Christian communities by organizing Los Conversos cultural festival during the first week of July, including theatrical plays, concerts, poetry readings, and projection mapping.

Spring is the best season to stroll around Plasencia’s cobblestone streets, but I also encourage you to visit in summer, when it hosts the Martes Mayor on the first Tuesday in August. The city travels back eight centuries in time, recreating the medieval market’s atmosphere with live music, traditional montehermoseña clothes (with their colorful, tasseled hats and richly embroidered sleeves), handcraft stalls, and food from the neighboring comarcas.

What to eat in Extremadura

We tend to undervalue what we have on our doorstep, venturing as far as possible from home, thinking that we already know our region and have sampled all the products our country offers – often to realize later how wrong we were. For example, on my last visit home, I tried chafaina (a traditional stew made with lamb meat and offal) for the first time – it tasted much better than it sounds or looks.

Extremadura has very delicious and diverse local food, as well as a unique gastronomic and social experience: el tapeo (where you order a drink and get tapa for free).

In Plasencia, there's a Feria de la Tapa (tapas fair) in Sept/Oct, with a long list of participating bars – and every year you can vote for the best tapa.

The Gorge of Hell (or Garganta de Los Infiernos) Natural Reserve is by far my favorite place to explore when I come back home. It’s the perfect place to chill and refresh every summer and there are numerous options for outdoor activities – trekking, canyoning, canoeing, paddle surfing, and mountain biking trails.

Once, I joined a local association on a nocturnal hike starting at Los Pilones natural pool. We walked into the wild under a starry sky on a full-moon night, and even heard wolves howling in the distance. It was one of the most amazing experiences I’ve ever had.

For introspection, I love to visit the history-rich county of Las Hurdes, where the echoes of legends – about elves, the Macho Lanú (a mythological billy goat/human creature), enchanted Moorish princesses, and much more – are passed on from one generation to the next. This isolated shepherd's refuge has innumerable hidden architectural treasures and welcomes all those who are ready to embrace nature and dive into their culture. 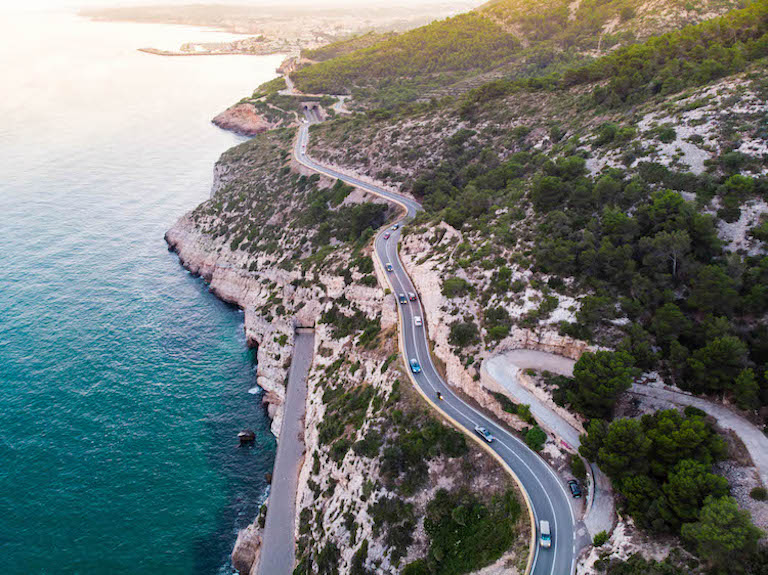 Tips For Driving In Spain

With its rich culture, diverse landscapes and stunning coast, Spain is fantastic to explore safely by car.