6 Tips for First-time Travelers to Jordan

Matthew Long shares six tips to make sure you have a safe and enjoyable trip to Jordan. Find out about the local food, what to wear, and what to expect from the locals before you go.

Though the 2011 Arab Spring is several years behind us, the reverberations are still felt throughout the Middle East today. The instability in Egypt especially has had a lasting impact on tourism not only in that country, but surrounding nations including Jordan.

In response to this tourism challenge, Jordan has rallied and launched an aggressive campaign to show people not only that there are many great experiences and adventures to be had, but that the country is safe. And indeed it has been safe. (Please note, I’m only writing about my experiences and can’t foretell the future, yet).

Throughout my stay, I felt safe and secure – enough so to wander around the sometimes hectic streets of Amman in the evenings hunting for culinary treats. No matter where in the country I visited, at no time was I concerned for my safety.

Realize, though, that I’m writing from the point of view of a white, 30-something American male and that my experiences may not be the same for everyone. Of course, that goes without saying no matter where you travel.

Plan to see more than Petra

Most people are familiar with Petra, thanks in large part to Indiana Jones. And while, yes, Petra is amazing, not to be missed, and remarkable, there are other things to do and see in Jordan. A week is not even enough time to fully explore just the highlights of the country: two weeks would be best if possible.

To capture the brilliance of the desert, an overnight stay in Wadi Rum at a Bedouin camp is something everyone has to try once. It’s bizarre, but standing in the middle of a flat desert plain, gazing upwards at the millions of stars, I felt more connected to the world around me than anywhere else I’ve been.

For something a little less dry, spend some time in Aqaba and the Red Sea. A hugely popular resort area, the Red Sea is famous for its snorkeling and scuba diving, both great ways to escape the desert heat. No matter what your interests are, there is plenty to do and see in Jordan.

I enjoyed the sites and the natural wonders, but, personally, the star of the show was the food in Jordan. I think it appealed to me so much because I, like the food, am not fussy. I detest haute cuisine and instead find a certain comfort in simple street food. Bread forms the backbone of Jordanian cuisine: it’s everywhere.

For a dollar or two, you can buy kilos – yes, kilos – of freshly-made bread to take back and savor alone or with any of the small dishes that comprise the rest of Jordan culinary tradition. Hummus, ful and falafel are common dishes served in huge quantities to share with friends or guard miserly for yourself.

Know what to wear in Jordan

When people think of the Middle East, images of hot deserts usually populate the imagination. However, the weather in the region can be fickle and, depending on the time of year, it can actually be quite chilly. Light snow in Amman and northern Jordan is not unheard of. Research the weather in all the areas of Jordan you plan to visit and bundle up accordingly.

Also, keep in mind that the preconceived notions of intense heat can indeed be true, as I learned when climbing the rocks around Petra one incredibly hot afternoon.

Dress isn’t only about the weather though, it’s about cultural expectations. Most countries in the region appreciate a certain level of decorum from visitors. This doesn’t have to be extreme, but it is a good idea to wear light-weight long pants, and for women, a shawl when touring around – especially if you plan to visit any religious sites.

People are strange. I haven’t seen many outwardly negative people while traveling – most of the time everyone is happy to see a tourist, and a welcome of some sort is extended. Some people are better at this than others, and a much smaller percentage are actually sincere about their welcome. Jordan is such a place.

In fact, not only was the hospitality and kindness I encountered in Jordan effusive: I think the Jordanians may be some of the nicest people I’ve ever met traveling. Thailand usually wins this contest, the citizens in the Land of A Thousand Smiles can’t be beat, but Jordan has given them a run for their money.

Simple gestures, like giving me a cup of coffee or a loaf of bread, were noteworthy, but it went beyond that.

The people I met really wanted me to learn more about them and their country and went out of their way to educate me. Yes the food was great, yes there’s tons to do and see, but – for more than anything – I would return to Jordan just to be around the people again.

Jordan is an exciting, fun place to visit. But, like most travel destinations, it’s best if you just relax and go with the flow.

Amman can be frenetic, but not overly so, and there are many quiet nooks and crannies to explore. The rest of the country is dynamic and not easily summed up in one word, but your patience and flexibility when exploring the best the country has to offer will always be rewarded with amazing, once-in-a-lifetime experiences. 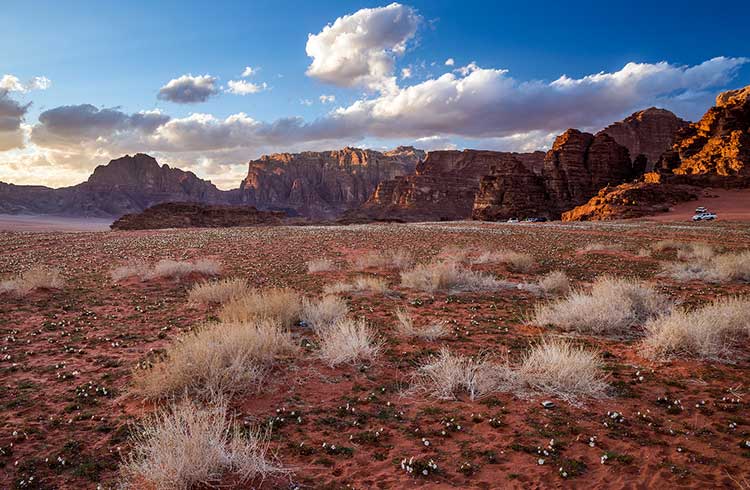 How to Prepare for Jordan’s Extreme Weather

If icy mountain roads and snow falling in the capital Amman don't sound legit, here's everything you need to know about weather extremes in Jordan.