4 Reasons to Visit Turkey in Winter

The winter season in Turkey offers ancient monuments dusted in snow, great skiing, and plenty of winter sun without the heat and crowds. Nomad Lisa shares her favorite things to see and do.

Most people visit Turkey in summer for its beaches, archaeology, and history but I prefer it in winter; there’s still plenty to see and do, but with fewer crowds and less heat and humidity. Simply replace swimming with skiing, dress warmly instead of for the beach, and wear sturdy, waterproof footwear instead of sandals. Here are four Turkey destinations that are especially worth visiting in wintertime.

The ancient city of Mardin

In Mardin, in southeast Turkey, honey-colored stone buildings cascade down a hill overlooking former Mesopotamia. Throughout the centuries the town has seen Assyrian Christians, Arabs, Seljuk Turks, an Artuqid Turkoman dynasty, and even the Ottomans claim it as their own. Stone walls studded with wooden doors lead through unexpected, low-slung arches to a bazaar area with streets that are so narrow and windy, donkeys are used to carry out the garbage. It’s my kind of town, perfect for walking, getting lost, and finding treasures.

These include Kırklar Kilesi (Mor Behnam), the serene Church of the Forty Martyrs, the gorgeous Abdüllatif Mosque, and Zinciriye Mesdresesi, a religious school. Or Ulu Camii, the Great Mosque – from the terrace café, the one remaining minaret covered in Seljuk, Artuqid, and Ottoman inscriptions looks close enough to touch. Mardin and Sakıp Sabancı Mardin City Museums are each of note, both for their collections and the buildings themselves.

Domestic visitors love the post office, built in 1890 as a home for a prominent local family. A grand staircase leads up to a wide terrace with sweeping views. In summer it’s packed with tour groups and wedding parties, but in winter there’s room to breathe.

It’s impressive, but I think Deyrul Zafaran (Mor Hananyo), the monastery and original seat of the Syriac Orthodox Patriarchate four miles outside the city is the undisputed star. I saw 300-year-old doors, inscriptions in Syriac, the Patriach’s throne, lush wall hangings, and even a visiting church dignitary decked out in full religious regalia. It’s possible to visit the ancient fortress city of Dara on the same day. Recent discoveries now date these ruins back to 3000BC.

I’m not normally a big fan of souvenirs, but the items sold in Mardin are far from ordinary. There’s delicate silver filigree jewelry from nearby Midyat, paintings of the Şahmaran (a mythical half-woman, half-snake creature), and wine made by Assyrians.

The Hittite capital of Hattuşa

I was hopeless at history in school because I couldn’t remember dates, but walking through an archaeological site, I get it. In Hattuşa, near modern-day Boğazkale, it’s easy to see how the ancient people lived. The Hittite’s highly developed urban planning skills are evident in paved roads, fortifications, and other structures enclosed by an almost 5mi (8km) stone wall. With snow covering the masonry, entering via the Lion, Royal, or the majestic, weather-worn Sphinx Gate is like stepping into Narnia. The cold is a plus – it makes the 4mi (6.4km) walk, including a steep hill, comfortable to do.

A little over a mile away is Yazılıkaya (meaning inscribed rock), the Hittite Empire’s holiest religious sanctuary. Two sizable rock chambers contain striking examples of relief art showing processions of gods wearing traditional kilts and pointed hats, along with other carvings. Archeologists believe the site depicts the Hittite’s understanding of the cosmos, consisting of the earth, sky, and underworld.

Alacahöyük was an important cultural and artistic pre-Hittite center. Only 23mi (37km) from Hattuşa, it was first excavated in 1907 with digs continuing until a few years ago. Temples, sphinx sculptures, and most importantly, 13 royal tombs have been uncovered. I like the fact it combines an archeological site with a museum. Although most of the original pieces are now in the Ankara Museum of Anatolian Civilizations, the displays help me understand where everything fitted in, dates and all.

Modern-day Antakya was founded as Antioch-ad-Orontes in 300BC. Named for the Orontes River (Asi in Turkish), Antioch was a Christian community under Roman rule, but control of the city was contested right from the beginning. Everyone from the Arabs through to the French had a go at running things, before Hatay officially become a province of Turkey in 1939. Today there’s still a strong Arab influence in the food and spoken language.

The most important sites are outside the city center but within walking distance. Temperatures in summer make for tough going, but not so in winter.

The collection of Roman and Byzantine mosaics in the Hatay Archaeology Museum is the second largest in the world. Some date back as far as the 1st century AD. Being surrounded by large, intricately tiled panels depicting skeletons, portraits of the gods, and fantastic imaginings of children riding whales and dolphins is an extraordinary experience, knowing they were also seen by people living almost 2,000 years ago. The elegantly carved sarcophagi and sculpture of the pensive Hittite King Suppiluliuma in other rooms were equally mesmerizing.

Brooding cliffs loom above the simple façade of this church in a cave inside Mount Starius, where the term Christian was used for the first time in history. You don’t need to be a believer to imagine the impact St. Peter’s words had when he preached here in 38-39AD. Some of the interior stonework dates back to the original 1st century church and there are graves both inside and out so there’s plenty of atmosphere. Pope Paul VI designated it an official pilgrimage site in 1963, but few devotees visit.

Architecturally Habib-i Neccar Mosque isn’t spectacular, unlike its history. It’s named for a carpenter alive at the same time as Jesus Christ. According to Christians, Habib-i Neccar proselytized to people who didn’t want to convert, while Muslims claim he called them to follow Allah. Either way, Neccar was martyred and made a saint. Two sarcophagi in the courtyard are said to hold the remains of John the Baptist or Saint Peter, depending on who you believe.

When I lived in Kayseri, the provincial capital of Cappadocia, I was told if anyone borrowed something they’d return it when the snow melts on Erciyes Dağı (Mount Erciyes), meaning never. These days this 12,848ft (3,916m), formerly active volcano is better known for the Erciyes Ski Resort. The resort offers multiple ski runs of different lengths catering to all levels. Even someone like me who’s not a skier can have a great time sledding and trekking in the snow.

There’s a range of accommodations, equipment rental, restaurants, and shops on the mountain. However, Kayseri itself is just under 12mi (19km) away and many city center hotels offer reasonably priced transfers to the ski slopes and back. The streets are flat and easy to traverse but in winter non-slip shoes are essential.

Inside the much-restored walls of the 3rd-century castle, shops sell sucuk, a spicy local sausage and pastırma, a cured meat similar to pastrami. Have a bite and then warm up with a cup of salep, a drink made from ground orchid roots and hot milk, before heading to the quaint Ethnography Museum (in the former Güpgüpoğlu mansion). I come from a family of sewers and loved the tableaux showcasing local costumes and domestic traditions. 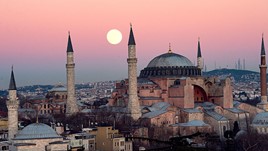 5 Things to Know Before Traveling to Turkey

From do’s and don’ts, to what to wear, to making sure you have enough cash, Istanbul local Lisa shares her tips for travel to Turkey. How Strict is Islam in Turkey? Tips for Travelers

Turkey is a predominantly Muslim country, but how strict is the adherence to Islam, and is there a need to modify your behavior? 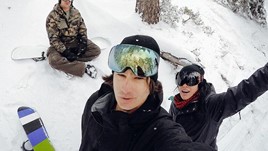 Whether you're a mogul maven or a piste plodder, check you're covered.