Exploring rivers, lakes, bays, and canals by kayak offers access to places you can’t reach by car or on foot and up-close encounters with birds, manatees, and other wildlife. Our nomads share their favorite kayaking adventures around the United States.

It’s the only time I’ve ever wanted someone to ask me about my sunburn. “I got it kayaking the Oswego Canal,” I’d brag, not embarrassed that my legs – thanks to sporting shorts on an open-top kayak – were the color of a lobster.

We launched from Minetto, a tiny hamlet in upstate New York just south of Lake Ontario. The local outfitter we rented our kayaks from also supplied a guide. She wore a mic and as we paddled with the current, north toward the port town of Oswego, she told us about the canal’s history as a vital commercial thoroughfare. When it opened in 1828, the Oswego Canal linked the Erie Canal with Lake Ontario, and was a game-changer for trade between New York and Canada.

Passing through the historic locks – hydraulic lifts that raised and lowered us as the water levels changed – was the best part. But by the time we reached the Oswego Lighthouse, looking out over Lake Ontario, my legs and feet were fried. Still, it was worth it. While I wish I’d worn more SPF, I’ll always remember those five miles, four locks, and three hours of history and fun. – Katie Jackson

I was looking for some kind of sign. Drifting in the slow current of Vermont’s Missisquoi River, I scanned the forested riverbank for any indication I’d reached my first campsite along the 740mi (1,190km) Northern Forest Canoe Trail, the United States’ longest inland water trail.

Designed for both canoers and kayakers, the route begins in New York’s Adirondack mountains, then passes through Vermont, New Hampshire, and Quebec en route to Fort Kent, Maine. Paddling the whole trail is an endurance feat even for experienced boaters, who spend four to seven weeks navigating its extraordinary chain of lakes, rivers, and streams.

Not that the trail is reserved for experts. Recommended sections range from placid day trips to family-friendly, multi-day adventures. Seeking time alone on the river, I’d chosen a scenic three-day section near my home in northern Vermont.

It was nearly dusk when I spotted a yellow campsite sign nailed to a riverside tree. Steering my small wooden kayak to the bank, I climbed a short, steep trail to a clearing overlooking the water — like many tent sites along the NFCT, it was free to use with no reservations required. While I brought my own boat and camping equipment, rentals and guided trips are available from outfitters throughout the region.

After setting up my tent, I returned to the riverbank with a mug of hot tea. The Missisquoi shone under a rising gibbous moon, then disappeared quickly into darkness. I smiled to think that, come morning, I’d follow it around the bend and paddle downstream once more. – Jen Rose Smith

This blessed slice of southwest Florida is God’s gift to waterborne adventure. A 190mi (306km) trail for paddling the waterways of the Fort Myers area along the Gulf coast, the Blueway works its way up three rivers and their tributaries, through Estero Bay and Pine Island Sound and around many coastal islands. The trail is, in fact, composed of dozens of different trails.

The northern edge of the Blueway is the top of Pine Island near Bokeelia. The southern end is the Imperial River through Bonita Springs. The trail has three distinct regions: the Pine Island Sound-Matlacha Pass, which includes Cayo Costa, Captiva, Sanibel, and Pine islands; the Caloosahatchee River and its tributaries (power boats use the Caloosahatchee itself); and Estero Bay (the state’s first aquatic nature reserve) and the Imperial River, which includes Lovers Key, where I saw my first manatee up startlingly close.

I became a water baby, imagining myself an honorary Calusa, the people who put down roots among the mangrove forests of southern Florida 5,000 years before, and left at what is now Mound Key Archaeological State Park a complex of mounds and shell and pottery remains, which rises more than 30ft (9m) above Estero Bay.

As well as mangrove tunnels, with branches arching overhead like cathedral roof trusses, the Fort Myers area has 50mi (80km) of white sand, three species of nesting turtles and, on Sanibel, one of the best shelling spots in the country (the same island is home to the J.N. “Ding” Darling National Wildlife Refuge and 245 species of birds). It’s easy to get back to nature there. And occasionally, suddenly, in the form of a bottlenose dolphin, a river otter, a pilot while, or a roseate spoonbill, it will get back to you.

The Blueway will mail a free set of maps to anyone who requests them, and there’s a navigational app that provides real-time GPS coordinates. A great many trails are served by kayak outfitters and guides, many of whom will come to you. – Joe Furey

For me, kayaking has always been a way to slow down and appreciate my environment at a more intentional pace. I tend toward hiking and biking – moving strongly and quickly so I can see as much as possible – but, for some reason, when I slide into a kayak, I’m less focused on how far I go and more concerned with soaking in my surroundings.

Mirror Lake State Park, near Wisconsin Dells, allowed me to do just that. I visited in early October, at the tail end of kayaking season but just in time for fall foliage and bird migration season. Kayak rental is available from April to October (depending on the weather) but in May, September, and October, rentals are only available on the weekend. If you bring your own kayak, you can paddle whenever you want.

The lake is long and narrow, shaped somewhat like the letter “h”, so kayaking through the narrowest part (the top of the “h”) felt like floating along a river. Pine trees and brilliantly yellow and orange maple hugged both sides of the water as I navigated around fallen trees and passed a Frank Lloyd Wright-designed cottage hidden in the trees.

Though I didn’t pass any sandhill cranes on my water journey, I saw many during bike rides in the area and while visiting the nearby International Crane Foundation. Next time I visit Mirror Lake State Park, I plan to bring my mother, as it’s one of the most accessible in the state for people with disabilities. A specially adapted kayak is available (contact the park office in advance to book it). – Cassandra Brooklyn

Every summer I return from the American West to the place I grew up, the mid-Atlantic state of Maryland, where I’ll spend a few days on its Eastern Shore exploring a vast filigree of salt marshes and sandy beaches by canoe or kayak. With more than 7,700 mi (12,400km) of coastline shared between the fabled Chesapeake Bay, its tributaries, and the Atlantic, the state is a paddlers paradise where you can drift among bald eagles and dolphins and sleep on beaches with wild horses for neighbors.

Water rules Delmarva, the rural, folksy peninsula pinched between bay and sea, where you’ll find my favorite place to go, Assateague Island National Seashore, an undeveloped barrier island that runs for 37mi/60km along the Atlantic Coast. A water trail spans the lee side of the island to four backcountry campsites tucked among the pines, each about two to 12 miles (3 km to 19km) apart.

Out here there are no boardwalks and carnival rides, just miles of soft sand and stunted forests that are home to miniature sitka deer. Most people just drive up to the beach, pitch an umbrella in the sand and call it good. You, however, should rent a kayak from Assateauge Outfitters on the north end of the island ($70 for three days) and tool along the lee side of the island looking for herons and egrets. Come evening you can stake your tent in the forgiving shade of the pines and take a sunset dip. You’re almost guaranteed to come across at least some of the 200 wild horses that roam the island. How they got there – pirates? shipwreck? forgetful farmers? – is still something of a mystery.

About an hour southwest of Assateague on the Chesapeake side of the Delmarva Peninsula you’ll find a sneaker gem, Janes Island State Park, the first place I ever went camping. Today the park near Crisfield is home to more than 30mi (48km) of marked water trails and three backcountry campsites. You can rent a boat inside the park at the headquarters near the Daugherty Creek Canal ($55/day) and paddle about a mile east (1.6 km) on the Yellow Trail to reach Flat Cap Beach, a 5mi (8km) strand of unspoiled sand. The 12.5m (20km) Brown Trail circumnavigates the entire island, taking you past campsites and the vestiges of a small community from the 1800s.

No matter where you go, it’s best to know the weather and the tides and bring lots of freshwater for drinking. The mosquitos and gnats will eat you alive, so don’t forget some repellent and wear loose-fitting clothing. Then kick back in the sand, watch the sun set, and let the stars compete with the lighting bugs for brilliance. I’m confident you’ll see why I sometimes wish I’d never left. – Tim Neville 3 Remote Island Adventures in the US

Craving crowd-free serenity? Longing for pristine beaches? Fascinated by wildife, nature, and history? These gorgeous archipelagos just off the US coast are exactly what you need. Where to Hike in the USA Year-Round

The United States offers fantastic hiking every month of the year. Our nomads share their favorites – from easy day trips to multi-day treks – that let you enjoy the best of the seasons and the regions while avoiding the crowds. 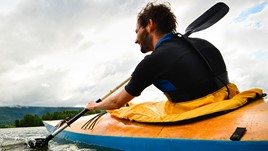 Whitewater or flat, pack your insurance as well as your paddles.