Weird and Wonderful Festivals to Experience in New Orleans

Our local insider Cassady Cooper reveals all the best festivals to check out, that you won't find in any guidebooks.

With so many great festivals happening year-round, visitors often wonder how much time off us locals take from work. Luckily, many businesses actually shut-down during large events or, at the very least, are forgiving if their employees take extra leave.

New Orleans has a history that blends catholicism with reckless abandon, such as voodoo, alcohol and public nudity. The absurd nature of this recklessness has lead to many exciting events, and here are some of my favorites.

Treme, the Underbelly of New Orleans

The Catholics in New Orleans got it right: sin, repent, repeat.

Looking for different saints to ask for healing grace has lead local Catholics to create their own saints. If you find yourself on St. Claude Avenue and wonder what he's the patron of, you will soon find out he was no saint. He was just the man whose plantation become the oldest historic African-american neighborhood in the city, the Treme.

On the edges of the Treme is Our Lady of Guadalupe Chapel – the oldest church in the city, since it escaped the fires of the late 1700s in the French Quarter. Members have prayed to Saint Expedit for generations (he has no relation to Saint Expeditus). This saint arrived in a shipment to the city without a name, so the chapel’s members looked at the shipping crate. They found what they assumed was the latin name of the saint printed on the side: “Expedite”.

Leave the church and walk down-river (in New Orleans we don’t use compass points, get used to hearing up-river, down-river, lake-side and river-side) on N. Rampart to find the Voodoo Spiritual Temple, the domain of Priestess Miriam. She can help explain her religion, which arrived in New Orleans as early as the 1730s, and was introduced by slaves from the Benin region of West Africa. If you're here on St. John’s Eve (June 23rd) join the throngs dressed in white for a ceremony celebrating the 19th century Voodoo queen, Marie Laveau. It is held on the foot bridge at Bayou St. John.

When Carnaval is afoot, break away from the tourist crowds and seek out a more local tradition. Years of slavery and segregation have led to different ways of celebrating our biggest party. Go to the Back Street Cultural Museum to learn about the Mardi Gras Indians, the Baby Dolls, the Social Aid and Pleasure Society, and the Skull and Bone Gangs.

See the Mardi Gras Red Flame Hunters in our film.

Running with the Bulls NOLA-style

Celebrate our years of Spanish control by joining in San Fermin en Nueva Orleans. During this festival, we don’t just run from the bulls, we arm them. "Bulls" in New Orleans are actually Roller Derby ladies wearing horns, who are hungry for your blood.

If you visit during August – a period so hot and humid you really have to be crazy to visit – join the like-minded maniacs, the Hash House Harriers. These drinkers with a running problem put on the annual Red Dress Run, and though there’s not much running anymore, this is the perfect time to show off your calves in a lovely dress.

During summer, these festivals are also happening around town: Tennessee Williams Festival (March), Tales of the Cocktail (July), and Southern Decadence (late August).

Escape the city by crossing the Causeway over Lake Ponchartrain to the pine woods of Abita Springs, home of our first regional microbrewery. Tour the brewery and over-indulge in Abita Amber, then check out John Preble’s roadside attraction, the UCM Museum.

This little town also hosts the Louisiana Bicycle Festival in June. Jump on two wheels and cruise the rails-to-trails, Tammany Trace. A 27mi (43km) path between Slidell and Covington. With many breweries close to the path, you could even create you’re own bar roll. But, don't drink and ride – that's not smart (or covered by travel insurance).

From late January to late February, travel into New Orleans' east to see our version of TET Fest. The Versailles community of New Orleans East is one of the densest Vietnamese communities in the United States. At Mary Queen of Vietnam Catholic Church, celebrate over three days of great food, fireworks, dragon costumes and ear drum shattering music. Slurp delicious pho, bite into a banh mi and try some of the best po-boy bread in the region.

Come to New Orleans to see the Mardi Gras Indian, dance in the Second Line, worship the Voodoo, and learn that the locoals aren't weird after all – we're just enjoying life at a slower pace with a lot less inhibitions.

Get to know the public transport options before you arrive in New York, Portland, LA, Seattle or Austin with these tips from nomads.

Tipping in the USA: How to Do It Properly

Here's how to keep your waiters, waitresses, bartenders and cab drivers happy, while also fighting the battle of wage inequality in the USA. 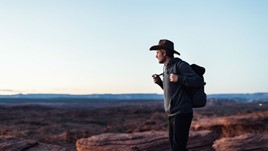