5 Things I Wish I Knew Before Visiting Latvia

Arriving in Latvia, en route to Russia, Kate O’Malley never expected to be so captivated by the tiny Baltic country. She goes beyond the stereotypes and shares what Latvia is like and what to know before you go.

I admit I had a preconceived idea of Latvia, expecting a charmless, even drab country. Instead, I discovered elegant cities, vast expanses of pristine wilderness and stunning white sand beaches, ultimately wishing I could stay longer to see more of the country. One week in Latvia was certainly not long enough.

1. Latvia is a well-connected transport hub

I had always thought of the Baltic States (Estonia, Lithuania, and Latvia) as an isolated group of countries in the furthest reaches of Europe.

Given the poor transport connections I have experienced between many Eastern European countries (primarily the Balkans), Latvia is surprisingly well connected with modern, efficient, and budget-friendly transport options beyond the international airport.

For as little as US $16, each of the Baltic States capitals can be reached from Latvia in a little over four hours on the luxury bus service, The Lux Express.

The Lux Express also has budget bus services from Latvia's capital city, Riga, to Saint Petersburg, Moscow (Russia), Minsk (Belarus), and Warsaw (Poland). There are also very affordable overnight sleeper trains. These connections, many of which are direct, offer a great experience as an alternative to flying and without the cost and hassle of airline luggage allowances.

This makes Latvia an excellent gateway for exploring the Baltic region as a whole.

2. The beaches are stunning

Latvia's coastline is more than 300mi (500km) long, with some of the most beautiful, if not curious, beaches in Europe. Stretches of secluded white sand beaches flanked by hauntingly beautiful pine forests line the Baltic coast.

The seaside town of Jūrmala is 30 minutes' drive from Riga, and is famous for its beautiful beaches and a unique architectural blend of 19th-century wooden houses and notable Soviet-era buildings such as Dubulti Station and the concrete monolith, the Ķemeri Sanatorium.

Around three hours' drive from Riga, on the west coast of Latvia, is the coastal region of Kurzeme. During the Soviet era, the coast was a heavily guarded border, mostly closed to development, leaving Latvia with miles of astonishing natural beauty along the isolated and rugged coastline.

A few coastal towns dot the coastal region — the most prominent, the 1.8mi (3km) Liepāja Seaside Park, a Blue Flag beach and one of the largest forested parks in Latvia.

Twenty minutes up the coast, the isolated shores of Karosta offer more than natural attractions. The Northern Forts are a series of abandoned bunkers along the Baltic Coast. Once part of the Naval Port’s defenses, much of the base was deemed redundant and destroyed by Tsar Nicholas II in 1908. The bunkers held strong despite efforts to blow them up.

Exploring the ruins, it’s ironic that, 100 years on, as the bunkers begin to collapse and slide into the sea like icebergs calving, they are starting to pique the interest of travelers to Latvia.

Further up the coast, 12.45mi (20km) from the quaint fishing village of Pāvilosta, are the Jurkalne Bluffs, a series of rounded cliffs.

One of the most beautiful beaches on the Latvian coast, Jurkalne (which translates to "Sea Mountain") has the steepest coast in the country. In places, the bluffs reach up to 65.6ft (20m).

The small town of Jurkalne attracts paragliders and kite surfers, thanks to a combination of strong winds and high dunes, but the long stretch of beach is often empty.

The people of many former Soviet countries have a reputation for being stony-faced or even downright rude. But Latvians – while not overtly gregarious – are very friendly.

Nearly all Latvians speak three languages well. In addition to their native tongue, Russian and English are widely spoken, even in the more remote areas.

If you need assistance, ask! Most Latvians will gladly assist, and many will go the extra mile to showcase Latvia's hospitable side. Perhaps this is why we are so charmed with Latvia.

Sheltering from a sudden downpour, a group of locals wave and gladly share their table at a restaurant while we wait out the rain.

I also experienced the hospitality of a young Latvian man I met at a food festival. Appalled I hadn't tried Latvia's national drink black bablsam (a herbal liqueur produced since 1700), he left his party of friends to escort me to buy a small bottle.

These gestures, small as they may be, shape my memory of Latvia.

At the crossroads of Scandinavia and Eastern Europe, Latvia's food scene is influenced by neighboring countries such as Sweden, Denmark, Finland, Russia, Poland, Germany, and obviously, Latvia's Baltic sisters – Lithuania and Estonia.

While a penchant for pelēkie zirņi – grey peas with speck (large grey peas similar to chickpeas, boiled then fried with fatty smoked bacon) – stand out, it is Latvia's love affair with delicious rupjmaize (dark rye bread) and what they do with it that intrigues me.

Try kvass, a refreshing traditional Latvian drink, similar to beer, made with rye bread. Considered to be nonalcoholic, it does contain a cheeky measure of alcohol, up to one per cent.

Or, rupjmaizes kārtojums a rye bread layered desert similar to a trifle.

5. It's easy to get back to nature in Latvia

One of Europe’s greenest countries, around 50% of Latvia is wilderness. Add to this 330mi (530km) of woods bordering the Baltic coastline, and Latvia is an ideal hiking and camping destination.

Designated campsites scatter the country, but unlike many places now, wild camping is still allowed in Latvia which makes getting back to nature here much more of an adventure.

While coastal hiking is one of the best things to do in Latvia, a great day trip from Riga is the Great Kameri Bog in the Kameri National Park. Bogs are one of Latvia's most significant natural resources, and many are protected areas of EU importance.

Less than an hour's drive from Riga, on The Great Kameri Boardwalk we cross the elevated moss marsh through a landscape of peat moss, fragrant wild rosemary, pines, and small lakes.

The wooden boardwalk runs in two arcs. The shorter arc a 0.93 mi (1.5km) walk and the longer arc a 2.2 mi (3.7km) walk with an observation platform that offers magnificent views of the bog from above.

One of the most picturesque landscapes in Latvia, The Great Kemeri Bog is a favorite sunrise and sunset spot for photographers throughout the year. Another thing, in hindsight, we wish we knew about Latvia. Is Riga Safe? Find Out How to Travel Safely in Latvia

Latvia has a reputation for crime and scams targeted to travelers, and here's what you need to know to stay safe. 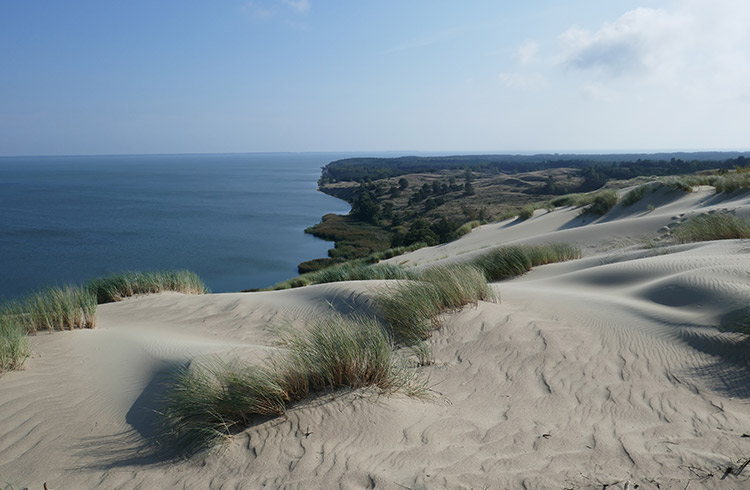