Concordia, in Argentina’s Entre Ríos region, is blessed with hot springs, wildlife, and interesting local history. Though well-known among Argentines as a holiday destination, it’s relatively overlooked by foreign travelers. Nomad Heather shares what to see and do here, and why it’s worth a visit.

Concordia is full of surprises. Before visiting, all I knew about the city was its hot springs and a connection to the children’s book The Little Prince. I discovered that the area is great for spotting wildlife, has lots of local history, and offers lovely beaches on the giant Salto Grande reservoir.

Officially named San Antonio de Padua de la Concordia, the city is easily accessible from Buenos Aires (which is 267mi/430km to the south) by car or bus and is in the region of Entre Ríos (meaning “between rivers”), sandwiched between the Paraná and Uruguay Rivers.

Hot springs for all

Three hot springs in Concordia caught my attention: Termas Concordia, Termas del Ayuí, and Termas de Punta Viracho, all about half an hour north of town, in a forested area on the banks of Salto Grande.

It was a warm day when I went to Termas Concordia, but the thermal waters still felt lovely. There are seven open air pools in varying temperatures, plus two covered pools. I visited the massage spa and the small restaurant, which had weak coffee but good food. There are dozens of cabins to rent, hidden discreetly in the forest a few minutes’ walk from the pools; perfect if you want to retreat from the world.

Termas y Parque Acuático del Ayuí is much livelier. The name Ayuí is an indigenous Guaraní word, which means “flowing water”. There is a water park with three main pools – one with a giant water slide – and a lazy river. The day I went it was bustling with happy families. In the nearby forest, there is a great high ropes course in the trees. Enthusiastic kids whizzed along zip lines and concentrated intently on the Z-shaped balance beam. This is the place for a big group, where you can find something for everyone.

The hot springs at Punta Viracho are the smallest and the most peaceful. There are two pools here, and spectacular views across Salto Grande to Uruguay. This is the place for a relaxing soak as you watch boats on the lake and birds soaring above the water.

Beaches and wildlife in Entre Rios

Salto Grande also has beaches with lifeguards, where you can play in the water or lounge on the sand. Punta Soler, near Punta Viracho, has the most developed beach and a wonderful outdoor bar run by Juan Martín, who everybody calls Coco. This is also a great place for fishing and it’s famous for sportfishing the freshwater golden dorado.

If you’re into birdwatching, in the nearby forests I saw wild parrots, hawks, egrets and other water birds. As a bonus, the park that you drive through on your way to Punta Viracho is often home to grazing capybara, the native South American giant rodent.

The Salto Grande dam has an interesting history and progressive environmental protection programs. It began in 1890, with an imaginative entrepreneur named Gregorio Soler, who saw the set of rapids churning the river and thought that they could be used to create electricity. It took almost a hundred years and a lot of international diplomacy for the dam to become fully operational in 1983.

The power is split 50-50 between Argentina and Uruguay and the dam has so far saved the two nations from burning more than 30 million tons of oil. However, there are also environmental concerns about the dam’s impact on wildlife, especially native fish populations.

The tour of the dam starts in a giant native species garden and ends with a bus trip across the top of the dam to Uruguay and back. The garden is part of the dam’s mission to restore native trees and plants and bring back native birds and other wildlife.

Any fan of The Little Prince must visit the Castillo de San Carlos in Concordia. The author Antoine de St. Exupéry was an aviator and in his quest for postal service air routes in Argentina, he landed near the castle. Upon landing, his wheel strut broke. He was surveying the damage when two girls on horseback appeared and laughed at him, rather than offering to help, which for me is clearly his inspiration for how the Little Prince meets the aviator in the book.

Walking around the castle, you’ll notice the Silk Floss trees, with their barrel-like swollen trunks. They look much more like the baobab trees in St. Exupéry’s book than any baobab trees in Africa.

Besides Antoine de St. Exupéry, Entre Ríos has another fortuitous French connection. In 1872, Augustin Niez emigrated from southern France and worked first in viticulture, growing grapes for wine. By 1889 he had also started to grow oranges, which has become one of the main industries in Entre Ríos. Always ask for freshly squeezed orange juice, un exprimido, with your breakfast in Concordia.

Argentina’s currency is volatile, and you should always check the exchange rate when planning your trip. Be aware that there are two different exchange rates in Argentina: the bank rate and the cash rate. In January 2022, if I withdrew Argentine pesos from an ATM or used my credit card, I got about 100 pesos per US dollar. Many touristy places accepted cash USD at the rate of 200 pesos per dollar. I also exchanged USD for pesos in Buenos Aires on Calle Florida for 213 pesos per dollar. This is technically illegal, but very common and quite safe. The official bank rate is what you’ll see on any official exchange website. To know what the cash rate is, search for “Argentina dólar blue” and you’ll get the street rate for USD.

I didn’t feel that I needed to rent a car to get around. The bus from Buenos Aires to Concordia costs between 5,000-3,500 pesos, depending on if you want the downstairs super-plush seats or the upstairs seats. Hitchhiking is relatively common, and I found that people frequently offered me rides. The Concordia city bus took me to all three of the hot springs I visited and goes to the most popular beaches.

One of the best things about the hot springs is that they are great any time of year. During austral summer, the days are long and warm, which is better for spotting wildlife. However, the warmth of the natural thermal waters can be more appealing during the shorter days in May, June, and July. The coldest month is July, though it rarely gets below 60°F (15°C). 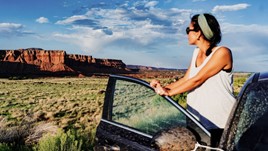