Traveling to Argentina soon? These travel and safety tips from Argentine native Martina will help you make the most of your time here.

1. How safe is Argentina?

Argentina is considered one of the safest countries in South America. Nonetheless, you should keep your eyes open when visiting cities like Rosario, Córdoba, or Mendoza. Petty crime rates in these cities are lower than Buenos Aires, but, for example, Rosario has been part of a drug-trafficking route for years, with increasing gang violence. Though this may not affect visitors, you should beware of suspicious situations.

Demonstrations in Argentina are common. Do your research before joining the crowds, and make sure it's a cause you identify with. And regardless of the occasion, prioritize your personal safety and stay in a spot you could easily leave if things get heated.

Small towns in the countryside are generally safe and secure, but you should use common sense and never leave your items unattended.

It’s always wise to be cautious when wandering urban areas. Though Buenos Aires is generally safe for travelers, it’s important to stay alert, as robbery is all too common.

If you plan to explore neighborhoods beyond the well-traveled areas, research beforehand, talk to a local, or book a tour.

Caminito (in La Boca), Palermo, and San Telmo are popular with visitors, but even here, if you keep wandering, you can end up in a not-so-nice area. Beware of this, especially at night. By all means, steer clear of public parks after sunset.

In general, the wealthiest neighborhoods are those north of Corrientes Avenue, whereas some of the most impoverished areas are located south of Rivadavia Avenue. Unfortunately, poorer areas often have higher crime rates.

Wherever you go, avoid talking on your phone on the street, keep valuable items in your pockets, and don’t wear expensive jewelry – especially necklaces, as these are easy to rip off. Always wear your purse or backpack on your front.

If going out at night, call a taxi or take an UBER. Avoid standing by the bus stops or taking the subway when there's no one else around, as you could be putting yourself at risk.

As of this writing (March 2021) Argentina is quite affordable for those bringing in high-value currencies, though it's more expensive than most other South American countries. If on a tight budget, expect to spend as little as US $22-30 per day, including hostel accommodation, cheap eats, and local public transport.

Patagonia and some other areas favored by travelers – including coastal towns such as Mar Del Plata and Pinamar, or iconic Iguazu Falls – are pricier. These destinations are always in high demand, both among locals and international visitors. Travel in remote areas can also be more expensive, as the transport of supplies becomes more difficult.

Credit and debit cards are widely accepted. Still, many restaurants, grocery stores, or hotels only accept cash or require a minimum expenditure before they let you swipe.

As Argentina is always battling inflation, exchange rates and regulations change quite often. When planning your trip, make sure to find information updated within the past three months.

Always keep cash and small change handy. If you need more, simply withdraw from one of the many ATMs scattered around cities and towns. Whatever you do, be discreet, avoid flashing your wallet, and don't extract big amounts in one go.

A 10% to 15% tip is expected but not mandatory, especially when eating out.

5. What is the best time of year to visit Argentina?

As a rule of thumb, it's best to visit between September and April (early spring through the beginning of fall). In the end, it will depend on where you decide to go, as the weather varies from region to region. But from spring to fall, you can generally find good weather around the country.

If you dislike extreme cold, avoid June-August, especially if heading to Patagonia. If intense heat is not your thing, skip Buenos Aires and the central and northeastern regions during summer. Here, you can expect 90°F (32°C) on a "cool" day.

Winters in Buenos Aires are mild, with temperatures ranging around 55°F (13°C). But, as you approach the south and westernmost regions, it starts to get more and more chilly.

When choosing what to pack, don’t forget sunscreen, as the sun in Argentina is seriously strong. Also, remember to bring layers of clothing. Many travelers visiting for two to three weeks choose to fly around the country because it’s so big. So, if you’re heading from Buenos Aires to Patagonia, you’ll likely experience a big temperature change.

Layering becomes essential when approaching the Andes, as temperatures drop suddenly from day to night, even over summer. Rain gear comes in handy especially when touring the central and northwestern regions, as it can rain buckets year-round. On average, November is the wettest month, country-wide.

Argentina has a massive and budget-friendly public transit network. The easiest way get around most cities is with a SUBE card, which you can purchase in lottery shops, train and subway stations, and kiosks. This rechargeable card is not valid everywhere, but covers major urban areas and over 30 other smaller localities.

As long-distance buses are the main means of transportation outside of Buenos Aires, intercity trains have been neglected for decades. But recently, there’s been a resurgence of the Ferrocarril, connecting 12 of the 23 Argentinian provinces. If you have time, the trains are a leisurely way to explore parts of Argentina that are off the beaten path, but be warned that they can be slow, are not very comfortable, and sometimes may not leave on time.

7. Taking a taxi or an UBER

Catching a taxi is very easy in any Argentinian city and surrounding localities. As a precaution, especially at night, always ensure your taxi is licensed and belongs to a "Radio Taxi" company.

Some taxis will display a sign on the vehicle's roof stating the company they belong to. If they don’t, and you decide to take it anyway, check out the taxi's registration information displayed inside.

Be aware, taxis around the country have different colors. In Buenos Aires, they’re black and yellow, in Córdoba they’re white, and so on.

UBER became officially legal to use in Buenos Aires in September 2020, so now you can ride with peace of mind. UBER's competitor, Cabify, is also available around the main cities.

8. Top places to visit in Argentina

Argentinian Patagonia, which covers nearly all of southern Argentina, is a must. As an avid traveler who loves to brag about her home country, I’ve yet to meet anyone daring to question the absolute beauty of this region, with its dramatic, snow-capped mountains, blue lakes, villages, glaciers, and incredible hikes.

Patagonian highlights include the Perito Moreno Glacier, Bariloche in the Lake District, Argentina’s hiking capital El Chaltén, remote Ushuaia at the tip of Tierra del Fuego, and Cerro Aconcagua, the tallest mountain in the Americas, in Mendoza (slightly north of the official start of Argentinian Patagonia).

A popular itinerary for road-trippers is a tour of the country's west, driving along Route 40. This drive skirts the Andes, and also covers the regions north of Patagonia – Cuyo and Northwest. The Andes is the longest mountain range in the world, and its southernmost stretch is home to the highest peaks in the Western Hemisphere, so be prepared for altitude sickness (as I learned the hard way).

Argentina's north offers a wholly different travel experience, ranging from the arid and striking landscapes of Salta and Jujuy, near Bolivia, to the country's very own New Wonder of the World, 269ft (82m) high, 1.6mi (2.7km) wide Iguazu Falls, in a lush rainforest along the Brazilian border.

Mendoza, in the Cuyo Region of the central-west, is famous for wine, but this sometimes-underrated region is also filled with otherworldly landscapes, like the Pampa Negra, a volcanic black desert in Mendoza Province, the moon-like formations at the Valle de la Luna, the windy flats of Barreal in San Juan, and the Grand Canyon-esque Sierra De Las Quijadas in San Luis.

Other standout natural landmarks in Argentina are the Esteros del Iberá, vast wetlands in Corrientes, and the wildlife-rich Valdes Peninsula in Chubut.

Travelers eager for a dose of urban life should know Buenos Aires has a reputation as a city that never sleeps. Museums, restaurants, nightlife, tango, and more make the Porteñian city sing. But Córdoba, Rosario, and Mendoza are also buzzing cities packed with activities, local culture, and great food. Try Rosario’s staple toastie – a carlitos – a traditional empanada Cordobesa, or a Mendozan classic such as humita en chala. 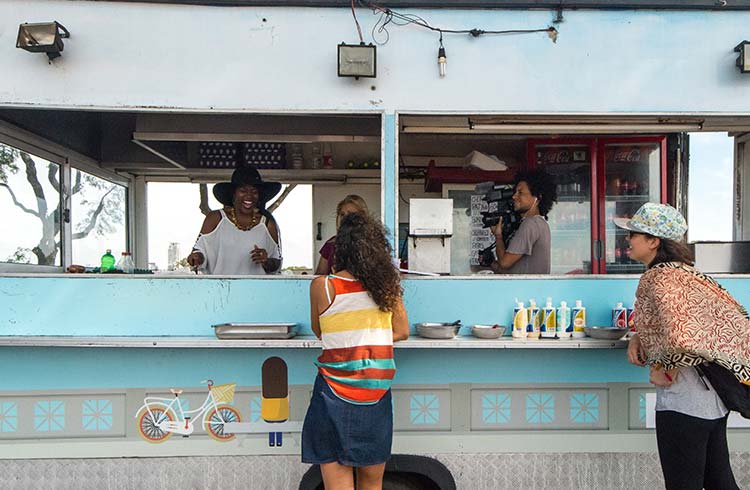 Join World Nomads’ Gloria Atanmo in Buenos Aires to explore the art of Argentine food, discover the locals’ passion for eating and the importance of a meal with family and friends.