"Oh, you're young. She thought you were going to be 50" said Yvette, the woman in the front seat, pointing to our guide and driver, Ana.

Another woman, Yvette's older sister Jillian, turns to me in the back of the small, red van. "Well, you're married and traveling alone. Who does that?"

Who does that? I've been answering that question a lot since I left my job, and it's pretty difficult to explain in broken Spanish to the Argentines I meet. Luckily, I'm riding with two 30-something American women. I cover the usual bases (a dissatisfaction with my job, a desire to follow my passions, a severe dislike of regret) as we weave through traffic on the way south of Salta. The women nod their heads in understanding.

Or was it feigned interest? You see, I don't know if they expected me to be a part of their sojourn to Cafayate.

The previous night, Ana and I exchanged a flurry of e-mails setting up my inclusion in her day-long tour to Cafayate, a popular town about three hours south of Salta known for its wild scenery and vineyards that are just now gaining worldwide attention. I waffled for awhile, unsure if I wanted to impose on a trip others had planned and accept a complementary tour. Ultimately, I decide to go; if Ana was inviting me to join them then there must have been some discussion with the others on the tour. Right?

The jury's still out on whether that was the case, but, as I climbed into the van just after 9am the next morning, I was met with nothing but kindness. Travel has a way of drawing back our layers, of exposing our bones. People are a little quicker to open up, a little easier to see into. It makes us more receptive and less judgmental. But I'm still disarmed by the kindness of strangers, by Ana's offer to squeeze me into her tour for free, by Yvette's and Jillian's willingness to share their day with me.

The four of us chat companionably, asking questions in an effort to get to know each other as fast as possible. Salta's southern limits abruptly end as we pass into a kind of cloud forest terrain. It is overcast and wisps of clouds mingle with the trees on the hilltops around us. Yvette recently sold all of her possessions and moved to Buenos Aires to work full-time as an artist. I smile; selling everything and jetting is a common story among travel bloggers. Jillian is a graphic artist and here visiting her sister. The two of them have been journeying around Argentina for a couple of weeks. Meanwhile, Ana peppers us with factoids about Salta province that I struggle to scribble down in the bouncing van.

On the northern edge of the Quebrada de las Conchas, an enormous gorge that connects Salta with the town of Cafayate, we are stopped at a police checkpoint. Ana produces the requested licenses and documentation, and the two policemen pace around the car periodically stopping to bend over and stare at something. I briefly wonder if there are nondescript brown packages beneath the sun cover behind me. A silver car is parked to the side of the road, every door and window - even the gas tank latch - sealed with official-looking tape.

Someone forgot their documentation.

Eventually the police end their show and bid us onward. We make a fortifying stop at Posta de las Cabras where I promptly consume a piece of torta de mil hojas, undoubtedly crammed with thousands of calories.

The road through the Quebrada de las Conchas winds, curls, and loops between looming serrated peaks like the intestines of some great beast. Shades of red, gold, brown, and green flash in the sunlight: the mountains' metallic bones peek through the sandy sediment. Layers of rock reach up from the ground, cocked at acute angles by some cruel force in the guts of the earth. Mind and camera struggle to take in the scope of the landscape. As we wend our way through the valley I picture our little vehicle as a microscopic organism crawling between the scales of a megalithic chameleon. We stop every five minutes to stand before natural grandeur and record our insignificance as the sun pounds the shadows of clouds onto the mountainsides.

Ana tells us it's believed that the Incans hid treasure in the quebrada after the execution of Atahualpa by the Spanish. To this day, intrepid Argentines comb the mountains looking for this ancient trove. It's one of those forest-for-the-trees moments when the treasure seems so obviously in plain sight to a foreigner like me. Each new hairpin turn yields a vista that further highlights the inadequacy of language. Eventually we stop talking altogether, the whistling of wind through rocks and the micro-beeps of digital cameras the only soundtrack to our prolonged awe.

After almost eight years in the corporate world, Keith checked out to follow his dreams of traveling and writing. He is the creator of Traveling Savage, and he now splits his time between his wife and home in Madison, Wisconsin and Scotland’s rills, hills, and valleys. 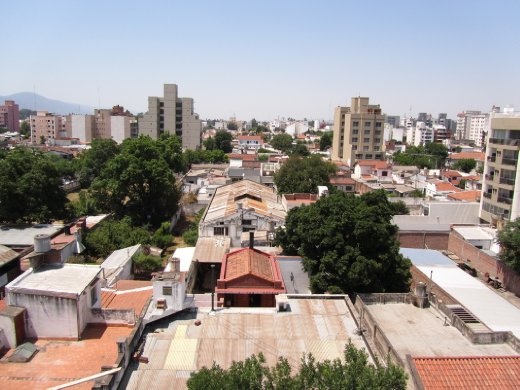 The Long Haul to Salta

Keith finds out that travel is not always glamorous, as he takes a long haul bus trip from Buenos Aires to Salta.