Discovering the heart of America in an old red barn.

I went to Maine in pursuit of the “real” America. I was chasing small towns, clapboard homes, and wooden lighthouses, diners, milkshakes, jukeboxes, baseball, and farmers in John Deere caps. I wanted to live a Bruce Springsteen song, to summon a summer from the pages of Mark Twain, Ray Bradbury, and Stephen King. The romantic in me longed for this; the realist assumed such an America had vanished beneath waves of corporate culture, political cynicism, and the decline of traditional economies. I didn’t expect to find the romance I was seeking, hidden in a red-painted barn.

Wiscasset is a gem of a village. It sprawls along the Sheepscot River in Lincoln County, a part of the US landmass that is as much water as earth, with countless streams and tributaries carving the land into islands. A sign welcomes you to “the prettiest village in Maine.” Having seen much of the state, I find it hard to argue. Main Street curves down to the river, where the state-famous Red’s Eats serves lobster rolls to drooling customers tired from ransacking the bookshops and antique dealerships that keep the small tourist economy pulsing.

I arrived by Greyhound from Vermont. It was the third month of my travels around North America, subsisting on bed and board for a day’s work. My home was to be an inn and restaurant on the banks of the Sheepscot. I would spend the fall and early winter working in the restaurant, tending the gardens and, on one perilously windy day, scrambling 30ft (9m) up a ladder to paint the eaves.

The inn was managed by Lara, and her father Mario, a classically trained chef, served garden-grown food to the affluent community. Built in 1763, the inn had been lovingly restored, with painted shutters on every window, antique furniture and even a private graveyard that housed the descendants of the original owners. There was the aura of an institution about the place. It was a landmark, an integral seam of glue binding the community. On Wednesday nights, the restaurant suspended its fine-dining prestige and we fired up the pizza oven. In the lazy twilight, everyone would eat and meet in the gardens, a slice in one hand, a bottle of beer in the other.

As I sifted through broken garden equipment and old tractor parts, I unearthed an odd-looking object. An angular puzzle of iron wheels and wooden frame, topped with a wooden bucket, it looked like something used to torment witches in this part of the world a few centuries earlier.

One mid-October afternoon, I was tasked with cleaning out a storage space in the barn. As I sifted through broken garden equipment and old tractor parts, I unearthed an odd-looking object. An angular puzzle of iron wheels and wooden frame, topped with a wooden bucket, it looked like something used to torment witches in this part of the world a few centuries earlier.

I dragged it out into the sunlight and went to fetch Lara’s husband. Jay was a real outdoorsman, long of hair, calm of temperament, and full of knowledge. He took one look.

Very old, as it turned out. This kind of press was common in the 19th century, before the advent of hydraulics. We were looking at history.

“Well, what do we do with it?” I asked, expecting we’d be selling it to one of the town’s antique specialists.

First, some restoration was needed. One by one, we sanded and varnished the wooden bucket panels to a deep, cherrywood gleam. Jay went in search of screws and bolts to fit a machine from another century. Somehow, he found them, proof that Mainers really do throw nothing useful away.

Finally, it stood there: oiled, stripped of rust, and with all its mechanical wounds healed.

We raided the band of apple trees that bordered the river. That small hoard filled a few large buckets; not enough to make more than a few pints. Clearly, we had to think about expansion.

In those few weeks, as fall submitted to winter, I think I met everyone in Wiscasset. Jay, Mario, and I went house to house along the rural lanes, knocking at doors and asking the surprised inhabitants a) if they had apple trees and b) would they like to join our informal collective.

The apples rolled in. We filled buckets and sacks and carted them home in the back of a rusted Ford pickup. Finally, we had enough to press and we set to work on an afternoon that glowed the very gold of apple flesh (though maybe that’s my memory doing its work).

It was hard work, turning the press by hand to crush the fruit. Each bucketful seemed to yield only a cursory amount of juice. Hour by hour though, the volume increased, until we had liters of the stuff. It gave off a medicinal odor that was far from appetizing. That’s where Mario’s culinary experience came into play. Liberal amounts of sugar, cinnamon, and cloves soon created an apple-pie aroma that made your mouth flood.

In that part of the world, cider isn’t usually alcoholic. It is, however, a delightful mixer for your own brandy, whisky, or schnapps. That’s why, the following Wednesday, the town gathered outside the inn, with a slice in one hand and a cup of cider in the other.

As I served the pizza, more than one person handed me a cup and a nod, and often a smile. There were faces I recognized and those I didn’t, but I felt wholly part of something. I felt like I had found my America.


Discover your own America - download our new guide, USA: Where Nomads Go.

Neil is an ex-academic who specializes in Gothic Literature. He ditched a particularly bad job to try his hand at living precariously for a year, roaming around the US and Canada.

As Neil McRobert learns, nothing reveals your fellow passengers' true selves like being confined together for thousands of miles.

Travel Writing Scholarship Winner Claudia Crook shares her favorite American holiday – Thanksgiving – with the Moroccan hosts who have treated her like family. Why Maine's Coast is Best Experienced by Boat

Whether in a kayak, a windjammer, a lobster boat, or a puffin-watching cruise, the way to explore this maritime state is by sea. 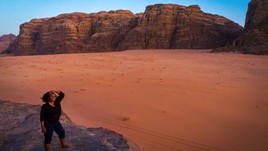 Professional travel writers know the big difference an opening line can make. Kick your writing skills up a notch with these tips.