How much can we truly understand about the lives of others?

I raised the expectation,
You shook your head sadly.
Like fish in water and fowl in the air
It’s not easy to meet…
I saw you off on your way
And felt hundreds of jumbled feelings.
—Nguyen Binh
(1918-1966)

For years I had loved the words “Perfume River.” I imagined sailing down this Vietnam waterway of which I knew nothing. I imagined it smelled gorgeous and the experience would be one of romance and poetry. That’s why, on my single day in Hue, the ancient, imperial capital of Vietnam, the first thing I did was find out how to take a boat ride on the Perfume River.

Since I had only a day, the boat ride needed to be short as I was keen on seeing the famous Imperial City, the 14th-century walled palace complex, in the afternoon. “No problem,” said the girl at the hotel desk. She arranged a taxi to pick me up in the morning and take me to one of the river’s dragon boats. The boats, shaped and painted like dragons, stop at the main sites along the river, and tourists can hop on and off. Since I didn’t have much time, she suggested I go directly to the Thien Mu pagoda and get a taste… or rather, a whiff of the Perfume River, then return to Hue.

At the dock, I found a boat waiting for me and soon realized I would be the only passenger. “Hallo Lady!” A thin, aged woman called to me. She reached out to hold my arm and steadied me as I jumped aboard the wobbly craft. She then bade me sit in a white plastic chair on the deck.

Most of the dragon boats looked grand, with two great dragon heads at the prow; this boat had only one. Like the woman, it was small and weathered, but I had complete confidence in its safety because the pilot, a silent, middle-aged man, looked steady.

With a long wooden pole, the woman, agile as a child, pushed the boat away from the shore. The engine rumbled to a start and off I sailed down the Perfume River.

The river gets its name from the fragrant scent of the blossoms from nearby orchards, that float along the water in autumn. In that season, the river must seem poetic but now, in winter, the wide, slow river was as gray as dust and the only fragrance I smelled was engine fuel.

I sat back and relaxed, watching other dragon boats chug past under the cloudy sky.

As soon as our journey was underway, the boat woman got busy. She unrolled a bamboo mat on the damp floorboards, went back into a small, dim cabin – the only room on the boat – and emerged with a styrofoam cooler of soft drinks for sale. I bought a can of Coke and the selling continued. The woman must have made at least eight trips back and forth into the room, returning each time to present a different array of wares: silk pajamas, embroidered cloth bags, fresh-water pearl earrings, horn bracelets, agate necklaces, key chains and sets of chopsticks, each charmingly tucked into a silk case. She spoke little English, but enough to be tireless in her effort to sell. Each time she brought out something new, I shook my head regretfully to show I was not at all interested, but after a short while, seeing her look disheartened, I relented and bought chopsticks.

I couldn’t see much life from the boat, as the riverbank was hidden behind thick foliage, so I became curious about the woman. I stole glances at her as she moved about. Her own stolen glances revealed she was equally curious. Now and then we smiled at each other, but made no attempt to converse.

After an hour or so we came to the Thien Mu (Celestial Lady) Pagoda. I jumped off the boat onto the sandbank and walked up the hill path, through the small pine forest to the pagoda. Built in 1601, it is the oldest religious structure in Vietnam, and the crown of the Buddhist monastery surrounding it.

The seven-tiered pagoda and the grounds of the monastery exude peace. Yet this most tranquil place was a center for anti-government fervor during the early 60s. It was from here in 1963 that one of the monastery’s monks, Thich Quang Duc, drove to Saigon, where he set himself alight in protest at the Catholic President Diem’s persecution of Buddhists.

Sobered by my visit, I returned to the boat and we headed upstream, back to Hue. Like all Vietnamese I had met, the boat woman was curious about a woman traveling alone and she began to ask me questions. We started to communicate with hand gestures and three-word sentences. I told her I was from America, that I had flown here from Hanoi, and the next day I would be going over the Marble Mountains to Hoi An. I told her my name and she told me her name was Hung, which I later learned means “pink rose.” With a hint of pride, she told me how old she was: 65.

She asked my age and I told her.

We were the same age.

The knowledge stunned us both into silence… and melancholy. Though the same age, my life was privileged. I was on vacation, overfed, with a full set of teeth, smiling, carefree, enjoying the freedom that comes with having leisure time and credit cards. She was still doing hard physical labor and struggling to sell trinkets to one passenger – and I sensed, struggling with something else.

The speed at which her smile vanished on realizing we were both 65 told me she, too, had felt the disparity. For the rest of the ride, she no longer smiled.

When we did speak again, I learned she had been married when she was 17. She had loved her husband since she was a little girl and, after they married, she bore seven children. One was her son, the dragon boat pilot with whom she now lived on the boat. She had never left Hue. Ever.

As she spoke, I did the grim math.

She and I were 19 in January of 1968. While I was in college, acting in plays and preparing for a fun-filled summer in Israel and Greece, she was a young mother in Hell. In January 1968, during the Tet Offensive to take back control of the south, the Viet Cong captured Hue, set up a provisional Communist government, and murdered thousands of civilians they thought were South Vietnam sympathizers. Nearly 3,000 men, women and children were tortured, executed, and thrown into mass graves. Another 2,000 went missing. 100,000 residents lost their homes, and no one in the city could have escaped the tragedy. After three weeks, the city lay in ruins and corpses lay everywhere. This was the infamous “Massacre at Hue.”

“Come,” the woman beckoned, and I followed her into the cramped, shadowy room. It was painted mint green and was sparsely furnished; in the corner rose stacks of cardboard boxes filled with her tourist wares. She walked over to a large, framed black and white photograph, pointed to it, then pointed to herself.

I looked up at the photo to see the face of pretty, teenage girl – an innocent bride.

“Beautiful.” I said. She understood this word and nodded.

“And your children?” I asked.

“No more,” she said quietly. “No more here. No more now.” She pointed to her son whose back was facing us as he piloted the boat. “One boy. No more now.”

We docked in Hue, she helped me climb out of the boat and I waved goodbye to her. She stood at the prow waving back for a long while.

As the boat sailed away up the Perfume River, the figure of the woman shrunk smaller, and it is that miniature, waving image of her that haunts. Not because my last view of her was at such a great distance, but because my full understanding of her – what she lived through and how – was at such a great distance, forever impossible for me to justly breach.

Confessions of a Romantic Traveler

Against the advice of friends, Maxine Rose Schur follows her heart to Morocco. 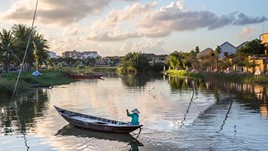 Local Laws and Customs in Vietnam: Know Before You Go

Laws in Vietnam may not be as strict in other countries, but can be policed heavily. Here's what you need to know, to stay out of trouble with the law in Vietnam.