What's it like returning home to a ghost town?

It’s disconcertingly quiet. Although not yet winter, the famously cold eastern winds are blowing, and it feels like it is. We walk down the middle of the road; there’s no need to worry about traffic in Pripyat.

It’s an unusual tour group of eight made up of three Australians, two Poles, a middle-aged Ukrainian couple, plus our Ukrainian tour leader Natalia. In the days following April 26, 1986, 120,000 people were evacuated from towns surrounding the Chernobyl Nuclear Power Plant in northern Ukraine, the result of the catastrophic nuclear disaster, and Pripyat was the largest of these. Experts believe the town will be uninhabitable for at least 200 years.

Tours now run through the Chernobyl exclusion zone, an area extending 19mi (30km) in every direction from the site of the nuclear reactor. On the two-hour bus drive from Kiev, I attempt light conversation with the Ukrainian husband and wife, but receive only gruff grunts in response. Each to their own, I suppose.

At the entry to the zone, we are handed Geiger counters used to measure radioactivity, a somewhat ominous gesture that I pretend not to be concerned about. The tour follows the very long, very wide gravel road which was the town’s main artery, but Natalia stops us routinely. She leads us off the bus into what always appears to be total jungle, only for an abandoned kindergarten or town hall to eventually emerge.

Soviet propaganda adorns the walls of the town hall, and a statue of Lenin remains, a reminder of the world’s biggest social experiment. A Ferris wheel sits eerily still at the theme park scheduled to open a week after the disaster, a joy-ride never ridden. In a darkly ironic twist, there are multiple piles of unused gas masks, intended for use in the event of a nuclear disaster, at the primary school.

During the tour, the Ukrainian husband, Oleksiy, is clearly impatient, bickering with Natalia and wanting to keep moving. I wonder why he would pay for a tour if he couldn’t be bothered looking around?

We stand on the terraces of Avanhard Stadium, where the local football team was once cheered on. We walk past abandoned cars, shops and homes. Some houses are in a wild jungle, some are decaying but still distinguishable as places where people once lived. The domed roof of the doomed number four nuclear reactor looms ominously on the horizon. When we eventually reach it, Oleksiy seems even grumpier than before, and decides to stay on the bus.

As the sun sets, we arrive at the final stop, a central former hotel with a rooftop offering views over Pripyat. But this is not what catches my eye. I notice Oleksiy, looking out over the overgrown forest that now strangles the town, has tears streaming down his face. His wife, who is consoling him, looks at me solemnly and suddenly I understand. Oleksiy has been here before.

He is from here.

This is probably the first time he has returned since he was evacuated as a boy. This is confirmed by Natalia. We know no more, nor do we press the issue. A pat on the back is all we can offer.

When we arrive back in Kiev, I thank Natalia for her tour and decide to look for a drink. Just as I am about to head off, I feel a hand on my arm. It’s Oleksiy.

“Thank you, thank you,” he says, shaking hands with everyone. The dramatic transformation from rough, impatient thug to warm-hearted Eastern European is complete. “You come to Ukraine anytime.”

It seems I have made a local connection. Even if he is from a ghost town.

This story was a shortlisted finalist in the 2019 World Nomads Travel Writing Scholarship.

Editor's note: If you intend to follow in the footsteps of this Nomad, think carefully before you go; travel insurance may not cover everything you do.

Hear our interview with the author on the World Nomads podcast:

Tim is a freelance travel writer. His entry was a short-listed finalist in the 2019 World Nomads Travel Writing Scholarship. He currently resides in his native habitat of Melbourne. 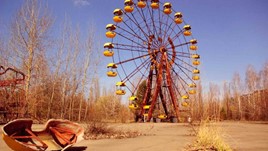 Is Chernobyl Safe? What Travelers Need To Know

Visiting Chernobyl and Pripyat? When will it be safe, and how can you avoid radioactive contamination if you choose to visit?