The Maasai are an ancient tribe that have done things a certain way for a long time. A good example of this is how they cook – many still using an open fire in a unventilated hut.

We were visiting a village of the Maasai in a remote part of Tanzania that have adopted a new type of stove that carries the smoke out of the hut, which saves countless children’s lives.

As we were approaching the village, our guide said casually, “By the way, there is a circumcision ceremony happening tonight.” “Are you serious?” we said. When we arrived, the villagers were doing the iconic dance that involves jumping high while chanting. The sun was setting and the scene before us was just breathtaking, so we asked, “Can we film this?” They agreed, and we took the cameras out straightaway.

When I saw the age of the boys, I thought, “Oh my.. I'd pictured someone a bit older.” Knowing this act is turning boys into warriors, I was expecting maybe 17 or 18-year-olds. But this rite is so ingrained in their culture. They aren't supposed to cry or show any sign of pain, as it’s a kind of a failure. In my opinion, they are tough as nails already, living in a simple way in a fairly inhospitable part of the world, with few possessions and few comforts, so they didn’t need to prove anything to me.

The sunset ceremony is a kind of pregame hustle to rile the boys up and get them ready. At midnight, the actual circumcision happens – we didn't stay for that. We returned the next day for the banquet to celebrate this key experience. One of the fathers donated a cow, which is a pretty grand gesture. They aren't eating lots of meat every day, so it's a big deal. Only the men partake – the women stay back in the village. The guys in their 20s were watching the older men, learning how to do it.

It was interesting looking at this as a vegetarian. It was a great example of a sustainable way to consume meat – killing the animal in a responsible way, and using the whole animal so nothing goes to waste. They use the skins as rugs and blankets, the bones go into bone stew, the marrow is a little tidbit while you're preparing the animal. Drinking blood is another big part of it, where they’re cutting back skin very carefully to separate out the blood vessel, and then pull the skin away to make a kind of drinking fountain.

As a documentary film maker, I've seen lot of incredible things around the world, but this was a real treat, watching a rite of passage playing out in a very ancient culture.

I think the whole ceremony was something simply to witness, not ask: “Is that knife sterilized? Is everyone okay with this?” In a lesser form, it’s the same with the meat – I’m not going to start handing out flyers on the benefits of going vegan.

I was curious about the prevalence of this circumcision practice in that part of the world. What do they think the equivalent is for us?

Miles' passion for film making and travel collided in the documentary space, where he found his true calling: telling stories, gathering images, and seeing the world all at once. 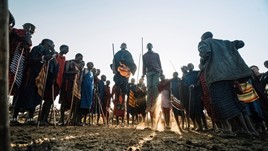 In this episode we meet filmmaker Miles Rowland who stumbled across an ancient Maasai ceremony in which boys become men and the celebratory banquet where drinking blood is part of the ritual.

Tanzania has more than 120 tribes, all with their own traditions and customs. The best way to experience their culture is to stay in a tribal village where you will be joyfully welcomed.