Video: How to Survive Kuta's Nightlife

Join us on a trip into the belly of the Bali beast, Kuta, where we discover some nasty nightlife pitfalls, plus find out how to come home with (some of) your memories in tact. We're not going to sugar coat it. One of the main reasons people come to Kuta is to party hard. It's no surprise that some people go a little overboard, and land themselves in some pretty hot water.

For some, the temptation to push it to the extreme can lead to some fairly hefty consequences, including drunken motorbike injuries, violence, inebriation and lengthy Indonesian jail sentences for drug use and possession – and now, even public displays of affection in some areas of Indonesia can cause major issues. Not the best way to end your island adventure – but an end that many travelers face nonetheless.

Under the influence in Bali

In the video, Jesse speaks to Craig Beveridge, head of the BIMC hospital in Bali, who speaks about some of the mind-boggling things travelers do under the influence.

"Yeah, look, I think a lot of them do things here in Bali that they wouldn't normally do at home. As an example, riding a motorbike without a helmet. You know you just wouldn't do it at home, and the roads are certainly no softer here.

"The thing is you can really hurt yourself on these things, especially if you aren't wearing shoes, a helmet, or pants. So if you find yourself in Bali not wearing pants for all the wrong reasons, you might want to get yourself a four-wheeled vehicle, at least you won't need to worry about complicated things like, you know, gravity."

Oh, and if you have travel insurance, you can forget about making a claim if you are under the influence of drugs or alcohol. It's just not going to happen.

Drink spiking and drugs in Bali

Drink spiking has always been a problem for travelers in Southeast Asia, so it's vital that you keep an eye on your drink at all times. If you're not careful, who knows what might happen.

There's no doubt that Kuta sells practically any drug you can think of: ecstasy, LSD, magic mushrooms, marijuana.

Remember that while these drugs are easy to find, it's even easier for you to get a jail sentence of up to 30 years, or face the firing squad if you're caught in possession of drugs. Just don't do it, okay?

We asked a few travelers about drugs in Bali, and it went like this...

Jesse: Have you heard about drugs over here?

Traveler 1: I know about magic mushrooms, and I had bad experiences.

Traveler 2: My boyfriend had (magic mushrooms), and it was not good.

Jesse: What happened to him?

Traveler 2: He thought he was dead actually, and I had to convince him that he wasn't. And that wasn't very fun at all.

Our advice to Kuta party-goers

So, if you have any memories left, and you'd like to take them home in one piece, keep these things in mind:

If you enjoyed Kuta's nightlife, it's likely Thailand's party scene is next on your list, watch what happens at Thailand's infamous Full Moon Party.

Get a travel insurance quote for Indonesia 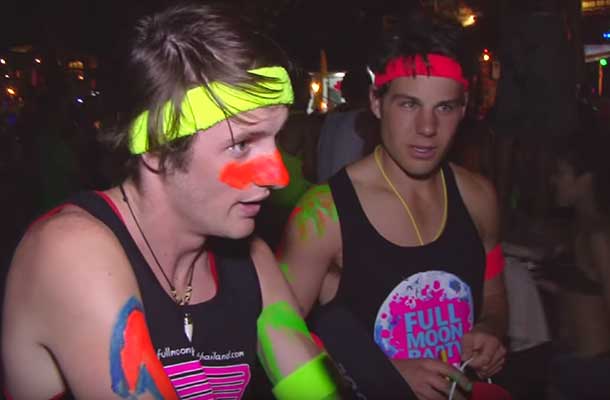 Watch the video to find out how to stay safe at Thailand's Full Moon with World Nomads, and see what goes on behind the scenes.