How to Build a Photo Essay

Photographer, and 2019 scholarship judge Mark Edward Harris, takes us through his published Japanese bath house photo essay and explains how to tell a story through images.

A photo essay is a series of images that make up a story. Simple enough. The key, then, is to find a compelling story to tell visually and, if you want to see the end results in print or online, understand what type of story will most likely get an editor’s attention. Annie Leibovitz told me while discussing concept development, “sometimes photographers overlook the thing that is right in front of them - it just seems too obvious.”

In other words, the best photo essays are often the ones that come from a personal interest, so search inside yourself before you go looking outside for ideas. Your own hometown will undoubtedly have some hidden, and not so hidden, treasures that could yield great photo essays. This, at the very least, is a great starting point.

Before venturing out into the world keep in mind that editors have a mantra, “a location is not a story.” Rather than a place, they want you to explore deeper with your camera. Get inside your location, find human-interest stories, and for publications try and peg your photo essay to the anniversary of a special or historic event (find my tips on pitching to editors here). Look for stories that give both you and the viewer an inside look into a culture by focusing on a person, a ritual, a unique aspect of history - the list is endless.

Let’s take my The Way of the Japanese Bath series as an example (pictured throughout). The third book edition was released on October 31 2019, and the images have appeared in hundreds of publications including more than a dozen magazine covers around the globe. Rather than trying to photograph Japan, I was looking for something that gave a glimpse into a culture that has fascinated me since childhood. I discovered my long-term photo essay in the hot spring resort of Beppu, a town often shrouded in water vapor on the southern island of Kyushu. It converted me into a furo-aholic (bath-aholic) in the early 1990s.

Three decades later, I still find the magical waters an endless source of both visual and visceral pleasure. I don’t think I could have done this project without the ability to speak conversational Japanese. What special skills, insights, and interests do you have? One of the reasons the great Sebastiao Salgado has been so successful with his photo essays and book projects is because his advanced studies in economics have given him special insight and understanding of how these forces play such an impactful role on the human condition. If you are not very familiar with his work, watch the documentary, The Salt of the Earth.

Components of a Photo Essay

Just like making a movie, the photos that make up the story are not usually captured chronologically. Rather, they are shot in a way that works best logistically then assembled in an order that works to best communicate the storyline.

The establishing shot is a vital component of a photo essay. This opening image should give the viewer a sense of what the story to follow will be about. Be on the lookout for this type of photo opportunity as you’re creating your story.

Perhaps the most important photograph to take in a human-interest photo essay is the environmental portrait. The idea behind this type of portrait is to show a person in a context that relates to them. Rather than hiding back with a long lens, try to communicate with the people you are capturing photos of (you can read up on photography etiquette here). Successful travel and documentary photographers have to break through that veil of insecurity and engage with people in a variety of situations.  A few words in the local language can go a long way to achieve that. The goal is to create an image that transmits emotional content and engagement with the subject.

A photo essay wraps up with a closing shot. It can be as simple as the setting sun with elements of your location since that time of day conveys a sense of completion.  For my The Way of the Japanese Bath series, I finish with a few images in the room of a ryokan (Japanese-style inn), a logical place to conclude a day of bathing.

Back home, I process my images and put my selects in an order that best visually conveys the experience of the Japanese hot spring. In this task, it's vital for each edition of my book that I’m a decisive editor. I have no desire to be on the receiving end of a critique like the one delivered by American satirist Ambrose Bierce – “the covers of this book are too far apart." 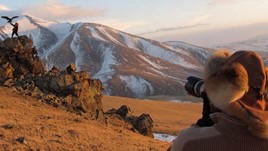 The Death-Defying Wild-Honey Hunters of Nepal

In this photo essay, Bhishma Thapa captures Nepali villagers as they harvest hallucinogenic honey from tall cliffs in the Himalayan foothills. What you need to know about toilets, food, trains, nightlife safety and if fugu fish really is dangerous to eat while traveling Japan.