Join World Nomads’ Joe Stuart, and thousands of others, when they come together in the small Spanish village of Buñol for a massive tomato food fight.

As the people of Buñol start to prepare for the tomato onslaught, Joe sees the usually quiet town transform as the streets become jammed with festival-goers and truck-loads of locals arrive to pelt them from above with tomatoes.

The crowds love it.

Once the hour-long food fight is over, while the locals clean the streets, festival-goers head to a nearby swimming hole to wash away the tomato mess.

Joe Stuart: So when the trucks are coming around the corner, the battle begins and it's just all out war. You feel possessed in a way that really feels like you're in a mad max movie or something. So I traveled to Buñol, which is this beautiful little town in Spain and that's where they have this beautiful festival called LA Tomatina. So LA Tomatina started in the 1940s or something, as simple as a food fight and ever since then, it's just got bigger and bigger and bigger. I wanted to see this from my own eyes. I wanted to see what it was all about. I just didn't get it. How the hell does this happen? How do you have the world's biggest food fight in such a small street? We met Nazru the day before the actual festival, Naz was just a champion. What has brought you to LA Tomatina?

Naz: Experience to feel life in different cities, festivals all around the globe. So I’ve been traveling a bit, like, just more than a month now, and I'm here.

Daniel: In 1946, here in Buñol there were two gardens next to each other. And one of the owners told the other, 'You're an idiot, my tomatoes are better than yours' So the other owner threw a tomato, POW! In his face! When he finished working on his garden, he came into town, 'Pepe! What happened to you?!' 'Juan threw a huge tomato at me! Look what he did to my eye!'.

Joe Stuart: And do you think it's wasteful all of the tomatoes being used just for this waste event?

Daniel: The tomatoes for La Tomatina aren't good to eat.

Joe Stuart: So why is this festival so important to this town?

Daniel: Because many people from Buñol moved to other cities for work and this festival represents the reunion. It's a big family festivity, you know? Every year the town provides us with hoses and we all stay after the party to clean and everybody helps. An hour after the tomatina is over, everything is cleaned already.

Joe Stuart: This festival is very important to that town. The sun was just coming up and already people were there starting the party. There was sangria, there was beer, there were people dancing. There are lockers provided all around the town there. So if you've got to bring a bag full of stuff with you, you can leave it there and pay for them to store it for you.

So I've spoken to the locals and they all say the same thing. The clothes that I'm going to be wearing will be destroyed. So what I've done is I've gone to a cheap shop, just in town here, bought myself a white shirt. Bought myself some goggles, brought myself, some cheap shoes that are just going to be completely destroyed. Things like my watch, sunnies, jewelry, leave those at home. Everyone is in a really, really great mood. I'm really, really feeling a bit of electricity going through my system now. Take a good look at me. I'm not going to look like this very soon. Before the event starts, you've got the whole street to wander up and down, and as you're walking up and down this street, there are people on the ground. There are people up in the buildings just hammering you with water.

So it's like running the gauntlet. At the front of the chapel there, the big church, there's this big pole, big wooden pole, the greasy pole. And at the top is just can, it's a competition to see who can climb up it, to get the ham and bring it down. It's virtually impossible with the amount of soap that's caked onto this pole. What is the point? I don't get it, but they love it, and they do it every year, and then the trucks start to come down. Up in that truck. There is a whole team just hammering you with these tomatoes and I mean, hammering, and then the battle begins and it's, it's just all out war. You jump around, you clap and you start chanting along. You feel possessed in a way. That goes on for about an hour. Now at first I thought an hour doesn't seem like a very long time. I've come all this way just for an hour. But then once the last truck goes, you're like, Oh, thank God for that. So immediately after straightaway, the locals are out and they're taking down the tops and they're getting the big, high pressure hoses out and they’re scrubbing the walls and the whole place, the whole town gets involved here.

Local: Every year the town provides us with hoses and we all stay after the party to clean and everybody helps. An hour after the Tomatina is over, everything is cleaned already.

Joe Stuart: And they play music in the streets and they start bringing food out onto the streets and it becomes, you know, a family affair for everyone. So traditionally after the fight, everyone goes and gets cleaned up in the river, a long line of people waiting to get clean. There's a little waterway system, a little river, and that was quite grubby and dirty, but if you just walk a little bit further through a little bush track you come to this gorgeous, pristine waterfall, the feeling of jumping in there at the end and just washing it all away and revitalizing my skin. You just feel incredible. It's great. It's actually really, really nice to just be able to go there with nothing and you can buy your food there, support the locals and participate in this event. That to me is one of the greatest things about traveling.
By Yasmin Bright,
World Nomads Contributor - Mon, 18 Feb 2019 World Nomads’ Joe Stuart hits on a real gem when he finds a local festival in California's Morro Bay. 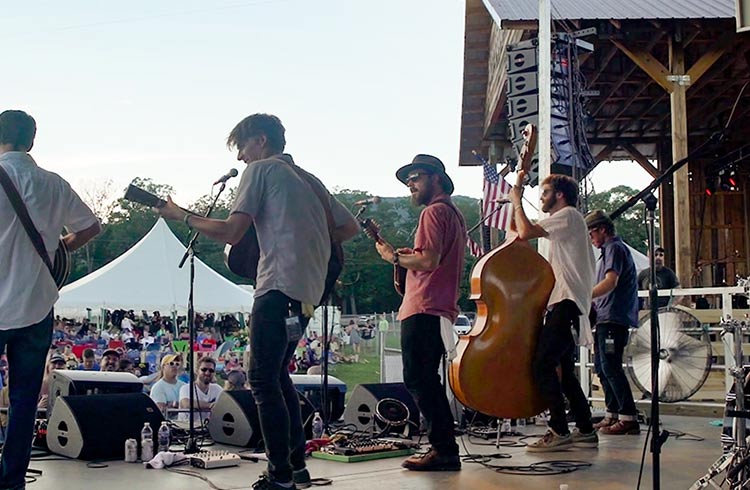