Laws in Thailand: How to Stay Out of Jail

What travelers need to know about drug laws, the legal drinking age, visa restrictions and the Thai royal family.

Thailand has long attracted hedonistic travelers, but don’t make the mistake of thinking “anything goes” in the Land of Smiles. Behave with the same caution and respect you show back home and you’ll avoid trouble.

In many Western countries, it’s normal for people to make fun of, or criticize national figureheads, even royalty. Thailand, however, has extremely strict laws called lese-majeste, under which people can receive long prison sentences for insulting its monarchy.

Like the UK, Japan, Spain, Belgium and the Netherlands, to name a few, Thailand is a constitutional monarchy. This means it has a Government, but it’s head of State is a royal figure. In Thailand’s case, that is King Maha Vajiralongkorn.

Lese-majeste complaints can be filed by anyone, against anyone, and are always investigated by the police.

While it is rare for tourists to be face lese-majeste charges, it can happen. So do not, in any circumstances, say anything negative about Thailand’s monarchy while you’re in the country. Also, do not write anything derogatory about the Thai Royal family online. It’s better to avoid mentioning them altogether.

There will also probably be times during your trip to Thailand that you’ll need to stand to attention as a mark of respect to the nation and, by extension, to its royal family. In urban areas, at 8am and 6pm every day, you’ll hear loud speakers playing the Thai national anthem. Follow the lead of locals, stop whatever you’re doing, and stand still and silent until the song finishes.

Another version of this occurs before movies at Thai cinemas. Just before a film begins a video is shown celebrating the Thai Royal family, during which the audience will stand quietly. Do as they do to avoid causing offence and potentially landing yourself in trouble.

Always carry your passport in Thailand

Thai authorities recommend tourists and foreign ex-pats carry their passports with them at all times while in Thailand. If you are comfortable doing that, then go ahead. Many tourists, however, are justifiably worried that constantly having their single most important document on their person greatly heightens the risk of it being lost or stolen.

I won’t advise against something that is law. Just make sure, at a minimum, you carry a clear, printed photocopy of your passport photo page, your Thai VISA page, and of your Thai entry stamp. Also keep photos of these pages in your phone. It is very rare for tourists to be asked by Thai police to show their passports. But if this does occur, then at least producing a photocopy and phone photo of your passport will help greatly.

It can be a life-altering mistake to ignore Thailand’s stringent drug laws. You could face a long imprisonment if found in possession of cocaine, heroin, ecstasy, LSD, opium, amphetamines, benzodiazepines, ketamine or magic mushrooms (among others).

And don’t be fooled by worldwide headlines about Thailand legalizing cannabis in early 2022 – smoking marijuana can still land you in a Thai jail. In 2018, Thailand became the first country in SouthEast Asia to legalize medical marijuana, and then in 2022, to an extent, it removed cannabis from its list of illegal drugs. I use that qualifier because it actually only legalized cannabis that contains less than 0.2% (by weight) of THC, which is the psychoactive compound in marijuana that has an intoxicating effect.

But cannabis smoked or eaten for recreational purposes normally has a much higher THC percentage than that. Thailand, then, has essentially legalized weak forms of cannabis that won’t get you high. So if you decide to buy marijuana while on holiday in Thailand, you’d better be certain it contains only the lawful amount of THC. And how can you possibly know that? Just forget about recreational drugs while in Thailand, where there’s many legal ways to find joy.

Buy a policy & choose to give back with micro-donations

You can add a micro-donation to the project of your choice when you buy travel insurance. People and places positively benefit from community development initiatives.

100% of all donations go to the program you choose.

In Europe, the legal drinking age ranges from as young as 16 up to 18 years old, while in Australia, New Zealand and parts of Canada it is 18. In Thailand, you have to be 20 years old to legally buy alcohol. This may surprise some readers, as many teenage tourists drink alcohol while partying in Thailand.

No matter what other tourists tell you about the leniency regarding underage tourists and alcohol, the Thai law is the Thai law. And Thai police have publicly stated they’re cracking down on underage drinking more than ever since the Pandemic began.

Don't overstay your visa in Thailand

Especially for backpackers slowly traveling around Asia, the desire to remain in Thailand for several months can be strong. And the same way you may hear it’s easy to get away with smoking weed, underage drinking, or not carrying any evidence of your passport, fellow travelers may convince you overstaying your Thai visa isn’t a big deal. “You’ll just get a small fine,” they may say.

To an extent, they’re right. If you remain in Thailand beyond the date permitted on your visa you’ll be fined 500 baht (USD $15) for each day you have overstayed up to a maximum of 20,000 baht ($600). I have met travellers who preferred to pay that maximum fine rather than face the hassle of renewing their visa.

That is a big mistake for two reasons. Firstly, if you are caught by police while wandering around Thailand overstaying your visa (as opposed to at the airport as you depart), you can potentially face more serious penalties, including a ban from re-entering Thailand for a period of time.

Secondly, if you overstay your Thai visa by between 90 days and one year, you face a one-year ban from re-entering Thailand, and will find it more difficult to get Thai visas in the future. The penalties increase for overstays of more than one year (three-year ban), more than three years (five-year ban) and more than five years (10-year ban)

Here's a tip: Never pat a monkey, even if it's on a leash: they can be vicious. I was out wandering with a friend on Haad Rin Beach, Koh Phangan Island, when we ran into a local walking his pet monkey. My friend bent over and patted the monkey and the local kindly let her hold it. Nestled in her arms, it seemed so sweet. Then I reached out to pat it and it bit me on the thumb, breaking the skin.

How World Nomads helped? Medical expenses for treatment, including rabies vaccinations and antibiotics.

Traveling to any other countries? 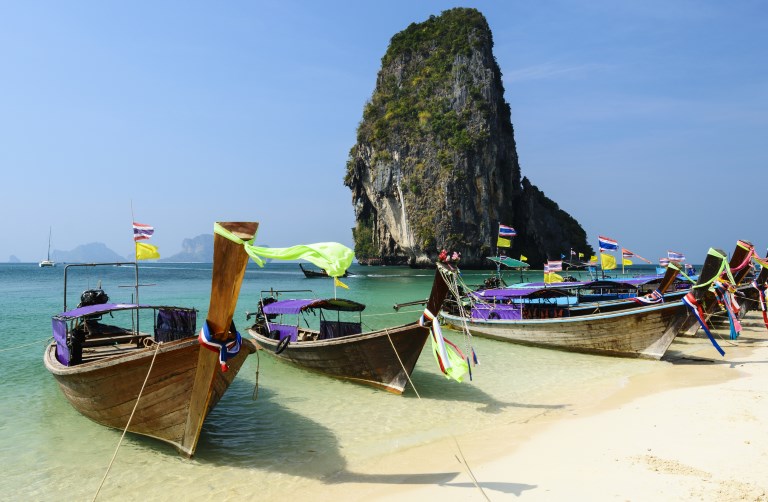 Nomad Ronan offers his tips on Thai culture, how to save money, how to stay safe, useful Thai phrases to learn, and the best time of year to go to Thailand.