7 Non-Touristy Places in Croatia for Avoiding the Crowds

Croatia has become a hugely popular tourist destination. In 2019 21 million tourists visited, making many attractions overcrowded, and locals feeling disgruntled. This doesn’t need to be the case. Go beyond Dubrovnik and Split to explore lesser-known Croatian towns, where the locals won’t be so frustrated by visitors, and you’ll get to see a whole new side to the country.

Zadar is Croatia’s fifth largest city, which was heavily influenced throughout history – evidence of this can be seen on Venetian and Roman ruins all around.

In Zadar, the promenade contains a unique treasure, the Morske Orgulje (Sea Organ), which was created by placing 35 organ pipes under the promenade. When the waves pass over the pipes, you’ll hear the Sea Organ produce a uniquely wonderful sound – a must see/hear!

Sukosan is 6mi (10km) to the southeast of Zadar. This ancient village has a number of swimming coves, pebbly beaches, campsites vineyards. Definitely worth a day trip if you’re looking for somewhere with less foot traffic – Sukosan is home to just over 4,400 people.

Sibenik is one of Croatia’s oldest traditional oceanfront towns, full of medieval architecture, culture, friendly locals, town squares, and beaches. You’ll no doubt have to pass through if you’re on your way to Krka National Park or the Kornati Islands.

Sibenik is a great place to discover Croatian history and explore over 150 islands. Sibenik is filled with museums, galleries, beaches, and street singing. Be sure to see Cathedral St James, a UNESCO World Heritage Site built in the 1400s.

Did you know? Season 5 of Game of Thrones was filmed in parts of Sibenik, which became a double for the city of Braavos. Funnily enough, Bravoosi skilled sailors and swordsmen – just like the people of Sibenik.

Starigrad is a port village located 25mi (40km) from Zadar, close to the National Park backed by the Velebit mountains. National Park has over 93mi (150km) of hiking trails, over 6mi (10km) of cycling routes, and over 360 climbing routes.

The town of Starigrad is home to many archaeological and architectural monuments, such as Vecka Kula tower – which was built in the 16th century and used as a watchtower to see ships passing through the Podvelebitski Channel.

Pag is the fifth largest Croatian island, with a National Park, two resort towns – Pag Town and Novalja – and a number of smaller towns. Explore the pebble and sand beaches surrounding the coast, and its barren, moonlike landscape to see why this is one of Croatia’s up-and-coming islands.

Novalja is a famous party town for Croatians, where they flock to Outlook festival in September each year. When the festival isn't on, the town is filled with locals, carnivals, and dances. The beautiful architecture, beaches, and deserted coves of the town have been likened to an Italian film set.

See how the Romans lived by walking through the narrow, underground Roman aqueduct, known locally as the Talijanova (the Italian hole), which once supplied the Romans with water.

Senj is located at the bottom of the Velebit and Male Kapela mountains (a two-hour drive from Zadar). Here, you’ll learn about local history inside its museums and see the symbol of the city – a medieval fortress called Nehaj.

Rijeka, a 20th-century port town, is Croatia’s third-largest city that’s filled with charm, culture, festivals and colorful carnivals. It’s home to the Trsat castle which was built in 1288 and is one of the country's oldest coastal forts.

Around the city, discover Our Lady of Trsat Sanctuary, Rijeka Central Market, a National history museum, beaches, and leafy-green parks for some fresh air.

If you’re in town on the last Sunday before Shrove Tuesday, be sure to join in the biggest carnival celebrations in Croatia. See a parade of carnival floats and fancy-dress costumes, including young men dressed in animal skins who shake enormous cowbells to drive away evil spirits.

Pula was built by the Illyrians 3,000 years and contains the world's sixth-largest Roman Amphitheatre. The city has a forum, main square, city hall (built in the 10th century), beaches, coves, and historic buildings to explore.

Pula is one of Croatia’s top diving destinations with caves, reefs, and sunken shipwrecks to discover. 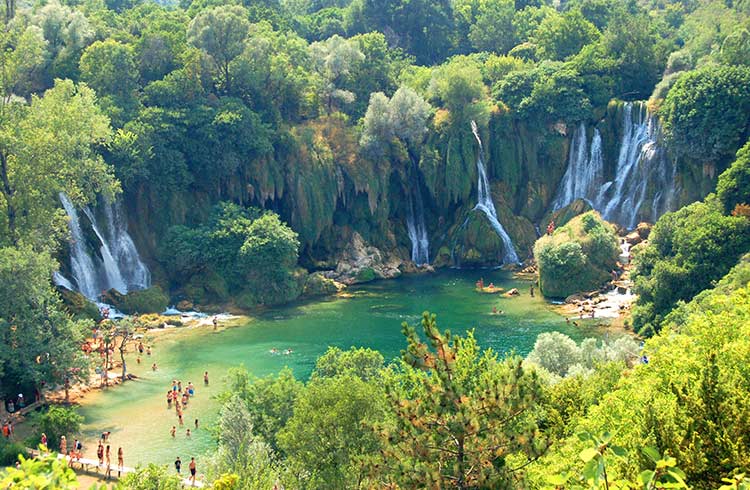 The Croatian Neighbor You Must Visit

Looking for somewhere to go aside from over-crowded Croatia? Skip the busy cruise ship docks for Bosnia and Herzegovina instead.