Beautiful Puerto Rico is one of the most popular destinations in the Caribbean, but there are a few things you should know before you go. Our travel safety expert shares his tips.

Coronavirus (COVID-19) in Puerto Rico: Read the latest travel alerts to find out how COVID-19 restrictions may affect you.

Puerto Rico is an unincorporated territory of the United States of America. Millions of travelers visit Puerto Rico each year, with the majority having a trouble-free experience, but, as you would anywhere, use your common sense. Here are our top travel safety tips to know before you go.

1. Is Puerto Rico safe to visit?

Yes, Puerto Rico is a safe place to visit, however there is a risk of natural disasters – such as earthquakes and hurricanes. The island has largely recovered from the impact of Hurricane Maria, which hit Puerto Rico in September 2017.

In January 2020, a string of large earthquakes struck Puerto Rico and caused severe damage throughout the country, leading the Governor Vázquez Garced to declare a state of emergency and activate the National Guard.

The Puerto Rican government put a lot of resources into tourism initiatives to encourage travelers to visit the island nation following Hurricane Maria, and will no doubt do the same following the earthquake damage in early 2020. This work assists in recovering the country's economy, as tourism is the number one source of employment for locals.

The risk of theft should be your biggest concern here, so be careful with your belongings – don't be flashy with jewelry, cash, phones or cameras. Keep it locked up in the safe back at your accommodation if you're going out at night – it's not worth losing your cards or valuables.

Another hot tip: Don't do drugs. Drugs are a major problem here.

There are 3.3 million people living in Puerto Rico, and most of the population live in the capital city, San Juan, and other larger towns, which are made up of different cultures and social classes. Wherever inequality and high population density occur, crime generally follows. That said, Puerto Rico has a lower crime rate than many major US cities.

Travelers will be most affected by petty crime, such as pickpocketing or robbery. Don't leave your valuables or belongings unattended and only take what you need out with you. If you plan to have a night out, always walk with someone else, in a group or grab a licensed taxi (white taxis with the lit up roof sign). Avoid wandering alone at night in particular near the beach areas where there is an increased risk of being robbed.

The local beaches are pretty safe during the day, just keep an eye on your belongings and don't bring anything you're not prepared to have stolen while having a swim.

Puerto Rico has a high homicide rate however this usually affects those involved in gang activity, the drug trade or both.

Tip: Learn some basic Spanish to make your trip just that bit easier, especially when you aren't in the urban centers. Even if you butcher the language, making an effort will still go a long way. If you become a victim of crime, being able to communicate to the police is important. Police outside of major tourist areas might not speak English, and while many locals are bilingual, Spanish is still the dominant language.

That said, if you do happen to be stopped by local police, don't attempt to bribe them. Always carry your valid personal ID with you.

Many travelers advise avoiding public housing areas, known in Puerto Rico as caserio, identifiable by their cement facades and apartment-like balconies. Gangs are a problem in these areas, and activities linked to the drug trade often take place.

Louis Lloren Torres, a caserio in San Juan is where a lot of the city's crime takes place. It's away from the safe, popular spots in San Juan, so travelers may get more than they bargain for if they end up there at night looking for recreational drugs. However, locals report if you are there during daylight hours, you're generally safe. Pinones, Parque de la Palomas and Santruce are also safe to visit during the day.

Other spots to avoid at night are the neighborhoods of La Perla (next to Old City) and parts of Puerta de Tierra. Stick to the neighborhoods of Old San Juan, Isla Verde, Miramar and Condado at night, where there are regular police patrols. Should you have an emergency, call 911 as you would in the US.

Car theft is a significant issue in Puerto Rico, so take any valuables out of your car, leaving it as empty as possible. If thieves see your vehicle empty of potential treasures, they will likely move on. Always park your car in a well-lit location at night.

Carjackings can sometimes occur, so avoid driving at night where possible, particularly through known crime hotspots. Keep your car door locked and valuables out of sight while traveling.

Puerto Rico is pretty safe for women travelers if you exercise some simple safety precautions and use your common sense as you would back home such as not leaving your valuables unattended and not wandering around poorly lit areas at night.

Some may experience verbal harassment. While it will be mostly harmless, it’s best to ignore it.

Puerto Rico is considered to be one of the most LGBTQ friendly destinations in the Caribbean, with the capital San Juan having an established and lively gay scene, particularly around Santurce and Condado Beach. However, it’s important to be respectful and discreet as the country is still conservative due to the influence of the Catholic Church. LGBTQ Puerto Ricans have the same legal protections as heterosexual locals and same-sex marriage was legalized in 2015.

Buy a policy & choose to give back with micro-donations

You can add a micro-donation to the project of your choice when you buy travel insurance. People and places positively benefit from community development initiatives.

100% of all donations go to the program you choose.

As Puerto Rico is a territory of the United States, that status does provide the country with local autonomy and the ability to fly its own flag. However, when it comes to criminal matters and the legal system, it’s the same as the US mainland.

The legal drinking age in Puerto Rico is 18, whereas in the United States it’s 21; making the country a popular destination for college students from the US on spring break. You will need a valid ID to purchase alcohol from bars, restaurants, stores etc. and it’s an offense to have open alcoholic beverages in public. Drink driving is also a major offense in Puerto Rico which can result in financial penalties and potentially jail time. The blood alcohol limit in Puerto Rico is 0.08 however it's best to walk or grab a taxi if you plan to have a few drinks.

Drone laws in Puerto Rico are the same as in the United States, and there are a few rules to know before you fly such as registering your drone with the FAA and not flying close to people, crowded areas and events.

Avoid taking photos in high crime locations (ask the locals where not to go!) and always ask before taking a photo of someone to avoid potential offense.

Get a travel insurance quote for Puerto Rico How to Stay Healthy and Safe in Puerto Rico

Can you drink the tap water, and what about vaccinations before you go? Find out how to stay healthy on your vacation in Puerto Rico. 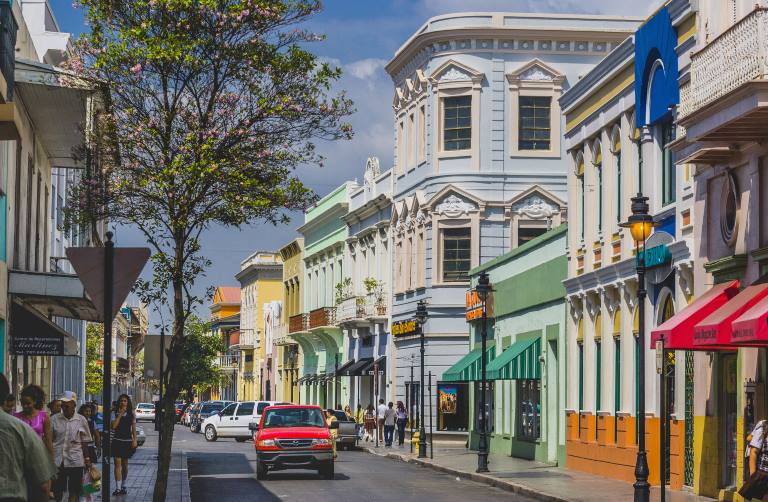 Driving in Puerto Rico: Rental Cars and Getting Around

Driving is the easiest and most convenient way to get around Puerto Rico, but like any destination, it has its challenges. A Puerto Rico native shares what you need to know about safety, road conditions, the local drivers, and other transport options. What are the issues affecting travelers in Puerto Rico? Read the latest travel warnings and alerts.