How to Stay Safe on Mexico's Yucatan Peninsula

Considered to be one of the safest places for travelers in Mexico, the Yucatan Peninsula attracts millions of visitors each year seeking sun, sand and adventure. Is there anything to worry about?

The Yucatan Peninsula is one of the safest places for travelers in Mexico, while petty crime can be found in most places, it has one of the lowest rates of homicide in Mexico (10 times lower than the rest of the country) and safer than major cities such as New York, Cairo London.

Many travelers report that taking public transport around the peninsula is safe during the day however, like the rest of Mexico, it's advised not to travel around at night. Carjackings have been reported, most occurring at night or on desolate roads.

A scam targeting visitors is money switching, particularly at gas stations. You may hand over a 500 peso note and the attendant swiftly changes it for a 50 peso note, insisting you need to pay more. Same occurs with the 200 and 20 peso notes. Make sure when you hand over the money you tell the attendant what you are giving them, keep your eyes on them and don't leave until you have the correct change.

Dodgy operators hiring out jet skis, quad bikes, scooters, and other equipment in the popular holiday spots on the peninsula. Always do your research before hiring.

Whether you're looking for a pumping club in Cancún or a quiet beachside bar in Tulum, the Yucatan has plenty of nightlife choices to suit everyone. Always drink responsibly and look out for each other while out and about. Aside from feeling like death warmed up the next day, with the hangover from hell, no one wants their valuables ending up in the hands of local thieves.

Pay for each round of drinks instead of running a "tab". The clubs are notorious for taking advantage of less-than-sober patrons and overcharging. For the same reason, check your change each time you pay.

Tipping bar staff and waiters expected. But tell them "Yo me de ti", which means, "I'll take care of you later". It's the best way of getting attentive service - but make good on your promise.

Promo girls dressed in skimpy clothes may try to approach you with a glass of tequila, ask for a selfie picture with you, but if you entertain them, you'll see your dollars disappear quickly. A shot of tequila costs around $9 to $10 each.

Drink spiking is common in the party spots around the peninsula. Keep your drinks close and never leave them unattended to go to the toilet or dance floor. Don't accept opened "free" drinks from strangers or recently-made friends. Sexual assaults against travelers have unfortunately occurred.

Bootleg alcohol is a problem so if you are planning to suck down a few cocktails, make sure you can see what is being used and how it's made.

Never leave valuables on the table. There are lots of fast hands around, aided by the darkness of a club or bar. Some nightclubs can be very large, so when you enter remember where the exits are in case of fire.

Be wary of new friends. Some are trying to gain your confidence to steal from you. Never tell them your hotel or room number. Refuse all offers of illegal drugs. The suppliers often work with corrupt police (or fake police) to shake you down.

Many people drown each year at popular beach holiday spots across Mexico due to the conditions, rips or misadventure. Cancún has some beaches with lifeguards present, however, there are plenty around the peninsula which aren't patrolled. To find out more about how to stay safe, read our tips on beach safety

The Yucatan is not without hurricane risk. Each year between June and November, hurricanes form in the Caribbean Sea will track their way towards the peninsula. Some as far south as South America. Something to consider when planning your Mexican trip. Hurricanes can cause widespread damage with strong winds and flash flooding.

Despite being one of the safest places in all of Mexico, because of the high number of visitors every year (up to 6 million in  Cancún has problems with petty crime.

A woman here is at no more risk than if she were on holiday in New York, Paris, or Sydney. However, there is one aspect of Mexican culture that many women may find confronting and uncomfortable – machismo – the exaggerated sense of masculinity, a belief that strength, entitlement, dominant behavior and virility are the essential attributes of being a man.

The drug war violence that has plagued a few parts of the country and claimed tens of thousands of lives is not a major issue in Cancún, although, on rare occasions, there have been shootings or murders in the hotel zone.

Police patrols can be seen even in the early hours of the morning. Mexico's 066 emergency number, responds quickly.

You are unlikely to get mugged, but if you leave your cell phone or wallet on a table, or leave a bag swinging from the back of a restaurant , it's possible a thief will seize on the opportunity.

For a change of scenery, head to downtown Cancún; while the city area may have its risks, if you use a little common sense, you'll be fine.
The sprawling nature of this city can make it difficult to identify when you've gone onto the "wrong side of the tracks".  Ask the locals where the safe places to go are during the day, and avoid wandering around at night. If you plan to check out the nightlife downtown, always catch a taxi to and from.

One ofCancún's biggest attractions its spectacular 14-mile long line of beaches with soft, flour-like, weightless white sand that remains cool on the feet even under the sun's scorching heat.

Cancún beaches are public. There are restricted areas within hotels and resorts, but they can't stop you from enjoying a swim at any beach.

The ocean beaches are prone to erosion and can suddenly go deep even when you're close to the beach. Lifeguards are identified by their red outfits and swimming conditions by colored flags.

Mercados is the term used for open-air shopping markets. They are actually flea markets where local goods are sold at bargain prices. The attract a higher number of petty thieves and pickpockets, so keep your money safe.

Check the change you're given by vendors and also double check what they've placed in the bag. Some vendors will swap your purchase for an inferior or fake item. Use cash, as card skimming and credit card fraud are common.

Tourism is the lifeblood of the economy in Playa del Carmen, and local authorities actively keep the streets safe and welcoming to visitors.

The main downtown area of Playa del Carmen is known as the "Central" part of  and has clean, well-lit streets. It's safe to walk through the downtown area during any time of the day, and you can often see police driving around.

Any violent crime in Playa rarely targets visitors. The worst crime that could happen to you? You may get scammed at a restaurant or pickpocketed.

There have been reports of an increase in thefts while enjoying a drink or meal. Never leave your wallet sitting on the table or bag slung over the back of a chair.

The otherworldly state of Chiapas, a rebel stronghold since the Zapatista uprising of the early 1990s, remains one of Mexico's most exhilarating and bewildering travel experiences.

With its tapestry of mystical jungles, sublime temples, fabled murals, precipitous waterfalls, and yawning canyons, Chiapas has been on the adventure traveler's radar for decades.

The beautiful colonial town of San Cristóbal de las Casas, which draws Zapatista supporters, progressives, erudite scholars, and archeologists, provides the launch pad to the area's cultural and natural attractions. It's a place where ancient Maya customs and modern conveniences coalesce, and where political theater and paganism find expression in the town's cacophonous markets, bars and cafes.
Travelers are advised not to wander alone in the hills surrounding San Cristóbal de las Casas. Always ask locals for advice if you plan to day trip off the beaten path from San Cristobal.

For travelers with cars and campervans, always make sure you camp in designated spots. Locals are particularly sensitive to dress (avoid revealing clothes) and manners; always ask before you take pictures.

Persistent begging and soliciting should be countered with courteous, firm replies. Dedicated to the study, education protection of Chiapas's indigenous population, Na-Bolom, in the center of San Cristóbal, is an invaluable stop before exploring.

A permit is required from the tourist office in town to enter the church of San Juan Chamula. Photos are not to be taken inside the church.

Just a 10-minute drive from San Cristóbal, cornfields give way to Maya villages where schools and buildings are inscribed with political rhetoric. Signs make it clear that "you are in Zapatista rebel territory. Here the people command and the government obeys." While the armed struggle has long since ended and a peace pact ostensibly signed, Zapatistas still feel that their demands were never met.

Many Maya villages in Chiapas remain under Zapatista control, complete with their own autonomous justice, health and education systems. The villages of San Juan Chamula and Zinacantán remain deeply rooted in traditional Mayan beliefs and practices. From fire running to animal and even drinking Coca Cola to expurgate one's sins, there's never a dull moment. This is a land that keeps you on your toes and sharpens the senses of even the most jaded traveler.

While travelers should not feel unduly concerned about their safety when traveling to Chiapas - there are currently no state government advisories in effect, it's wise to adhere to certain protocols when visiting traditional Maya villages and be respectful of the local culture.

Due to sporadic low-intensity guerilla warfare, always check the political situation before visiting the villages of San Juan Chamula and Zinacantán. It's advisable to experience Mayan villages as part of a tour or with a reputable guide who can explain the belief systems and values of a traditional Maya community and introduce you to villagers personally. Alternative Places to Go on the Yucatan Peninsula

If upscale tourist resorts aren't your thing, ditch Cancun for these alternative destinations on the Yucatan Peninsula. 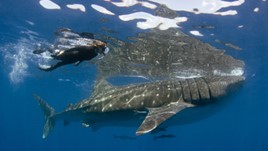